MELBOURNE • A car driven by a wanted man with drug and mental health problems has ploughed into pedestrians in the heart of Australia's second-largest city, killing four people, including a young child, and injuring more than 20.

Witnesses described "bodies flying through the air" and people running out of the way of the speeding vehicle in the central mall area of Melbourne yesterday.

Police said they do not consider yesterday's incident terrorism-related, but said the man had a long history of family violence, mental health and drug issues, and was wanted over a stabbing earlier in the day.

The trail of violence took place barely a kilometre away from Melbourne Park where the world's top tennis stars were playing the opening Grand Slam of the year, in a city teeming with tourists. 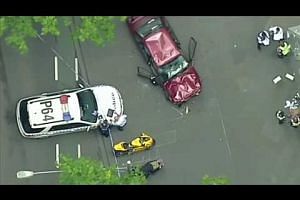 3 dead, 20 injured after man 'deliberately drove' into pedestrians in Melbourne 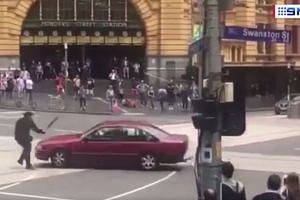 Melbourne's The Age newspaper has named him as James "Jimmy" Gargasoulas, 26, who also goes by the name Dimitrious.

Victoria Police chief commissioner Graham Ashton said Gargasoulas allegedly stabbed his brother at their public housing home in the suburb of Windsor, 6km south of Melbourne's central business district, early yesterday morning. He was already on bail after being charged last week with several offences. One of Gargasoulas' relatives told The Age: "Jimmy has always been a bad person."

Police learnt that Gargasoulas had seized an elderly neighbour's car which they began to pursue towards the city. That chase was abandoned for public safety reasons, leaving the car's erratic progress to be monitored by a police helicopter.

A female passenger, whom police believe was known to the driver, managed to escape from the car close to the city centre, where it headed for the landmark Flinders Street railway station at about 1.45pm.

To the shock of pedestrians and drivers, the car began a series of "burnouts", burning rubber as it circled the centre of the four-way intersection, with Gargasoulas leaning out, shouting incoherently.

Police cars tried to intervene, as did several bystanders, one wielding a baseball bat. But the car headed along busy Swanston Street and then turned into the heart of the shopping district, speeding along Bourke Street Mall, which was crowded with pedestrians.

A shop video showed several people diving into a convenience store as the car raced along the footpath.

It aimed randomly at people, leaving a man and a woman in their 30s dead, as well as another adult and a child aged about 10.

Up to 31 people were hospitalised, some of them eyewitnesses suffering from shock. Pictures on national TV showed an upturned baby pram. The child in the pram was critically injured, Mr Ashton said.

Eyewitness Sharn Baylis, 46, said: "We witnessed about half a dozen people who ricocheted off the car one way or another. I saw one person fly up almost (to the) roof level of the car... You could hear the gasping and the screaming from people, then you just started hearing the screams and the crying as it sunk in."

Ms Baylis said she and other bystanders gave cardiopulmonary resuscitation to a badly hurt man who had been run over. "I think it was pretty much in vain. The seriousness of his injuries, he was probably the worst I saw."

"There were probably 10 policemen surrounding that guy's car, with guns drawn, and they fired into the car. Then they dragged someone out via the passenger's side, then all 10 of them sat on top of him," she said. A handcuffed man in his underwear was seen lying on a footpath surrounded by police.

Prime Minister Malcolm Turnbull said: "The prayers and heartfelt sympathies of all Australians are with the victims and the families of the victims of this shocking crime in Melbourne today."