During a session of Parliament in Australia last week, numerous women MPs around the Chamber wore strikingly bright red clothing.

This loud choice of apparel, observers noted, was a silent but pointed show of defiance by a group of MPs from the ruling Liberal party.

They wanted to signal that they share growing concerns that the party has a "woman problem".

In recent weeks, the party has faced accusations of sexism and bullying. The women reportedly dressed in red to show solidarity with former deputy party leader Julie Bishop, who came last in a three-way internal race for the party leadership last month despite being, by far, the most publicly popular candidate.

When she later announced that she was stepping down as foreign minister, Ms Bishop wore bright, shiny, red high-heel shoes.

The Liberal party is facing growing calls to consider introducing rules to ensure a minimum proportion of female MPs. Just 12 of the party's 60 federal MPs are women.

The debate was prompted by the party's brutal recent leadership infighting, which resulted in then Prime Minister Malcolm Turnbull being toppled last month and replaced by Mr Scott Morrison.

After the turmoil, Liberal MP Julia Banks delivered an extraordinary statement, saying she was subject to bullying and intimidation from MPs who tried to pressure her to support the leadership change. 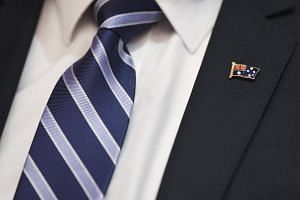 Ms Banks said she will resign at the next election, and will fight for gender equality because women have been "silent for too long".

Another Liberal MP, Ms Ann Sudmalis, last week said she, too, will stand down at the next election. She blamed "bullying, intimidation, leaking and undermining" within her local party apparatus for her decision.

Ms Bishop told an event hosted by the Australian Women's Weekly magazine that poor conduct and bullying had become the "norm".

She said: "When a feisty, amazing woman like Julia Banks says this environment is not for me, don't say 'toughen up princess', say 'enough is enough'."

About 30 per cent of all Australian MPs are women - equivalent to the proportion in Britain.

According to the Geneva-based Inter-Parliamentary Union, Rwanda has highest proportion of women MPs - 61 per cent of its Lower House MPs are women. Bolivia is next, with 53 per cent, followed by Cuba, with 49 per cent.

The Labor party in Australia has made active efforts to increase its number of female MPs. It plans to select women as candidates for 50 per cent of winnable seats by 2025.

After the last election, women made up 41 per cent of Labor's Lower House MPs, and 54 per cent of Upper House MPs. Surveys have found that women are more likely to vote for Labor than the ruling Liberal-National Coalition.

Mr Morrison has quickly come under pressure to address his party's alleged gender bias. He has asked the party leadership to consider ways to prevent bullying but opposed the introduction of specific quotas, saying candidates should be elected based on merit.

Speaking to ABC News, he said: "I believe, in any political organisation, it should be a matter of one's own effort and exertion and credibility. I don't believe quotas are the way you remove obstacles."

But the difficulty for the Liberal party is that without some form of mandatory intervention, it seems incapable of improving its gender balance. The party's proportion of women MPs has reduced in the past 20 years.

This could prove damaging for the coalition ahead of an election due by May next year. Labor has begun announcing women-friendly and family-friendly policies that allow photo opportunities for its leader Bill Shorten with his party's women MPs.

Commentator Jennifer Hewett said Mr Morrison could pay a political price for the party's failure to reverse perceptions that it has "a real problem with women".

Writing in the Australian Financial Review last Wednesday, she said: "Morrison is paying the price for his party's complacency on equality for women at just the wrong time for his attempts to sell 'new generation' leadership.

"Bishop and her red shoes have become potent symbols of the party's failure to sufficiently appreciate the worth of its female MPs."