SYDNEY (AFP) - Tourism operators want aerial shark patrols to be introduced in Australia's Whitsunday Islands as they try to stem falling visitor numbers following a spate of attacks along the Great Barrier Reef.

An English tourist is recovering in hospital after his foot was ripped off by a shark on Tuesday (Oct 29), while another had his leg mauled in the same attack at a popular snorkelling spot in the region.

In the past year, there have been several shark attacks in waters around the Whitsundays, a chain of islands that attracts both Australian and foreign tourists.

In two separate incidents late last year, a 12-year-old girl lost a leg and a man died of his injuries.

Tourism Whitsundays CEO Tash Wheeler said tourist numbers had fallen in the past year, partly as a result of the shark attacks.

"Looking back over the last 12 months, I can certainly say that there has been some impact to our industry in terms of visitation," she told reporters.

International visitors to the region dropped more than six per cent to 226,000 in the year ending March 2019, the latest available figures.

Ms Wheeler said tourism operators were seeking government funding for aerial patrols of the Whitsundays as an "interim measure" while research is undertaken into sharks in the area, which had been considered safe for swimming.

The latest attack comes just over a month after the Queensland state government removed dozens of unmanned shark traps, known as "drum lines", from popular swimming beaches after losing a court battle over its decades-old shark control programme. 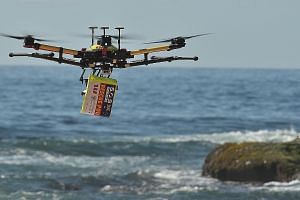 British man has foot bitten off, another hurt in Australian shark attack

The Federal Court ruled that sharks found alive on baits in the Great Barrier Reef Marine Park had to be released - which the government argued would be too dangerous for its workers to do.

After Tuesday's attack, the Queensland government announced it would install 32 additional drum lines just outside the protected area.

The Humane Society International, which launched the court action, denied the most recent attack was linked to the rolling back of "outdated" shark control practices.

Despite tens of millions of visits to the beach in Australia annually, shark attacks remain rare.

There were 27 attacks in the country's waters in 2018, according to data compiled by Sydney's Taronga Zoo.