CHRISTCHURCH (AFP) - The quiet city of Christchurch, still picking up the pieces from a massive 2011 earthquake, was again a city in shock on Friday (March 15) as armed police patrolled normally tranquil streets and locals struggled to come to terms with an outrage in their midst.

Hours after 49 people were murdered at the central Al Noor Mosque and a smaller mosque in the suburb of Linwood, members of the city's close-knit Muslim community gathered in grim silence in the city's nearby Hagley Park.

"This is the most peaceful, lovely place on earth, and will remain so," a soft-spoken Palestinian, who did not wish to be identified, told AFP.

For a few minutes during Friday prayers, the South Island's "Garden City", this "lovely place", was the scene of unfathomable hate.

Within minutes of the gunman opening fire in the early afternoon, the avenue was emptied of civilians as armed police swooped on the area, closing shops and businesses.

Schools across the city were barricaded, and the air was filled with the wail of sirens as police rushed to the mosques and ambulances ferried the dead and injured to Christchurch Hospital on the other side of the park.

Parents - who spent the morning imagining their kids bonding with friends and discovering their voice at a climate protest nearby - were left for hours fearing the worst as the city was put on lockdown. 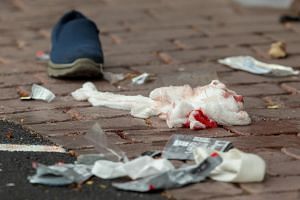 But as Kiwis came to terms with an attack that led to as many murders in one day as the entire country sees in a year, many vowed that their open society would not be changed.

Mayor Lianne Dalziel, through teary eyes and shock, insisted on unity: "It looks as if the worst has happened and we need to pull together and get through this situation."

Christchurch is no stranger to tragedy. Eight years ago, 185 people were killed when a powerful earthquake destroyed much of the central city on Feb 22, 2011.

Locals expressed determination that this tragedy, like the last, would draw the people of Christchurch together, regardless of religion.

As night fell, weeping local Wendy Johnson and her husband Andy arrived at the police cordon near Hagley Park to place a large fern - a symbol of the nation - and lilies in memory of the dead.

"We cut the silver fern out of our garden just to let all our Muslim community know that our hearts are breaking for them today and we stand with them in solidarity with them," Ms Johnson said through tears.

"They should be safe to pray however they want. It's unbelievable. There's no tolerance for this in our society."