Analysts see new trend in targets of recent killings; govt denies presence of ISIS or Al-Qaeda in the country

Concerns are growing about the spread of radical ideology and fundamentalism in mainly Muslim Bangladesh following a spate of recent killings by extremist groups, some of which have claimed links to the Islamic State in Iraq and Syria (ISIS) and Al-Qaeda.

In the past three weeks alone, Hindu tailor Nikhil Joarder and Mr Xulhaz Mannan, the editor of a magazine for the transgender community, were hacked to death by machete-wielding assailants in separate incidents.

Their deaths came just days after 58-year-old English professor Rezaul Karim Siddique was similarly hacked to death while walking to a bus station near his house.

A Muslim-majority country of 160 million people, Bangladesh has witnessed secular writers, bloggers, publishers, religious minorities and foreign nationals being increasingly targeted by radical elements over the past three years.

Police were yesterday reported to be investigating a new hit list that included the head of a university, journalists and ruling party officials.

The government seems much more obsessed with cracking down on political opposition than on ensuring that criminals with machetes stop axing down those (who) don't agree with an extremist view of Islam. 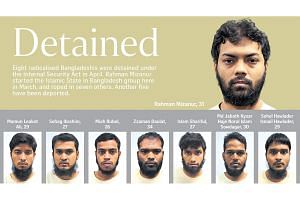 Separately, reports emerged that police were investigating a bomb attack on the home of a Christian family that left two people injured.

There is a new trend in attacks related to the targets, according to security analysts.

"A mixture of intelligentsia, activists and priests are being targeted. We have seen that the selection of targets has expanded. The common thread of all these attacks, it seems, is to create conditions for regime change," security analyst Md Abdur Rashid, executive director of the Institute of Conflict, Law and Development Studies in Dhaka, told The Straits Times.

The government of Prime Minister Sheikh Hasina has thus far denied the presence of ISIS or Al-Qaeda in the country, and instead blamed local terrorists and politicians for supporting far-right groups fingered for the killings.

Ms Hasina, in the wake of the death of the gay rights activist, blamed the murders on the main opposition Bangladesh Nationalist Party, or BNP, and its ally Jamaat-e-Islami, saying they have "been engaged in such secret and heinous murders to destabilise the country".

"Everybody knows who were behind such killings," she said in televised remarks last week.

But Reuters news agency, citing international human rights groups, has said the climate of intolerance in Bangladeshi politics has both motivated and provided cover for perpetrators of the attacks.

The opposition boycotted the last election in 2014 and two opposition leaders were hanged last November for war crimes committed during the fight for independence in 1971. The hangings provoked widespread anger among far-right and radical elements, who accused the government of a politically motivated campaign.

Experts say it is difficult to judge the influence of ISIS in Bangladesh.

"It is hard to say for certain if ISIS is truly operating in Bangladesh," said Mr Faiz Sobhan, a research director at the Bangladesh Enterprise Institute.

He said there was the likelihood of ISIS sympathisers but, thus far, no evidence has been uncovered of ISIS leaders in Iraq or Syria calling the shots in Bangladesh.

Many observers believe the aim of the militants is to sow panic in the country, and say the government should do more to deal with the problem.

"The government seems much more obsessed with cracking down on political opposition than on ensuring that criminals with machetes stop axing down those (who) don't agree with an extremist view of Islam," Ms Meenakshi Ganguly, South Asia director at Human Rights Watch, was quoted as saying.

A version of this article appeared in the print edition of The Straits Times on May 04, 2016, with the headline 'Rising concern in Bangladesh over spread of radical ideology'. Subscribe
Topics:
More
Whatsapp Linkedin FB Messenger Telegram Reddit WeChat Pinterest Print Purchase Article Copy permalink