The continuing aftershocks may be foreshocks before another large temblor, warn scientists

CHRISTCHURCH • The powerful earthquake that struck central New Zealand yesterday may have been closely spaced double tremors on separate fault lines, one triggering the other, said scientists.

What remains unknown, and disconcerting, is whether the high number of aftershocks that continue was just that, or foreshocks preceding another large earthquake, said principal scientist Kelvin Barrowman of New Zealand's GNS Science agency.

"It seems like the earthquake was more like two earthquakes, but very closely spaced in time," he told Radio New Zealand news.

Scientists are warning worried residents that the aftershocks of the 7.8-magnitude quake may continue for months, and some may be strong enough to cause more damage.

Said senior seismologist Dan Jaksa for GeoScience in Australia: "Let us hope this is not a foreshock of something bigger to come, which is certainly a possibility."

New Zealand Prime Minister John Key, after inspecting the worst-hit areas, summarised the situation as "utter devastation that will take months of work to repair".

The South Island town of Kaikoura, 150km north of Christchurch and with a population of slightly more than 2,000, has been left with many collapsed buildings and isolated by damage to its major highway north and south, as well as to the main railway line and electricity and telecommunications lines. 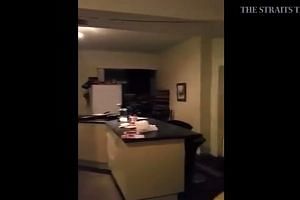 Civil Defence Minister Gerry Brownlee said: "Our immediate priority is ensuring delivery of clean water, food and other essentials to the residents of Kaikoura and the estimated 1,000 tourists in the town."

He had flown over the town yesterday with Mr Key.

Some victims are being evacuated by helicopter, and a navy multi-role vessel, HMNZS Canterbury, was heading to the area, he said.

New Zealand's Urban Search and Rescue said a 20-person rescue team and two sniffer dogs had arrived in the town.

Kaikoura Hospital's Dr Christopher Henry told Fairfax media that one of the two people who died after the quake was a man found in a historic house in Kaikoura that "collapsed like a stack of cards".

Two other people - one of them the man's mother, who is aged 100 - were pulled alive from the building, reported NewstalkZB network.

Mr Key described landslides in the area as "just horrendous" and said of the likely damage bill: "You've got to believe it is in the billions of dollars to resolve."

Hours after the quake, a dam created by landslides caused by the quakes had blocked the Clarence River north of the town, but then breached and sent a wall of water downstream. A group of kayakers and a party of rafters were reported missing on the river, but they were all later reported to be safe. Residents along the river were urged at the time to flee to higher ground.

The damage and aftershocks were a painful reminder of the February 2011 quakes that seriously damaged the South Island's biggest city of Christchurch. Residents evacuated from low-lying suburbs, but the danger did not deter heartless thieves who burgled more than 19 homes.

The second person who died was a woman resident of Mount Lyford, north of Christchurch, who suffered a heart attack.

A tsunami warning after the original quake was downgraded after large swells hit New Zealand's capital Wellington, in the North Island, and Christchurch.

Wellington's central business district was a virtual ghost town, with workers ordered to stay away while the city council assessed the risk to buildings, several of which were damaged by the tremors.