SYDNEY - Australian Prime Minister Scott Morrison came under further pressure on Sunday (Jan 5) over his handling of the bush fire crisis, as cooler conditions provided much-needed respite and allowed authorities to assess the devastation from the weekend's ferocious blazes.

As hundreds of fires continued to burn across the country, authorities confirmed that a resident died and at least 60 homes were lost during blazes that ravaged southern and eastern parts of New South Wales (NSW).

NSW Premier Gladys Berejiklian said on Sunday that the intensity and speed of the fires were "unprecedented" and that the state - Australia's most populous - was in "uncharted territory".

She said towns that had previously been considered safe from bush fire risk were now at risk of "being completely wiped out".

"We can't pretend this is something we have experienced before - it's not," she told reporters.

"The weather activity we're seeing, the extent and spread of the fires, the speed the way they're attacking communities that have never seen fire is unprecedented. We have to accept that."

The national capital Canberra endured the worst air quality in the world on Sunday due to smoke from surrounding fires. Residents were ordered to stay indoors as flights were cancelled and galleries, museums and universities closed.

Mr Morrison announced on Sunday the creation of a new federal agency to coordinate recovery and support, saying he will consider establishing a royal commission into causes of the fires and potential responses.

But the announcement did little to improve the fortunes of the PM, who has been heavily criticised for travelling to Hawaii on a family holiday as the fires raged last month and for his government's weak climate change policies. Experts have long warned climate change causes more severe and frequent fires.

Mr Morrison's struggle to persuade the nation he is proactively coordinating a national response continued on Sunday after the NSW rural fire chief revealed he was not consulted about Mr Morrison's plan to deploy 3,000 reservists and only learnt about it from media reports.

The Rural Fire Service commissioner, Mr Shane Fitzsimmons, told reporters: "I was disappointed and I was frustrated in the middle of what was one of our worst days ever on record with massive dislocation and movement of people and a focus on really difficult weather." 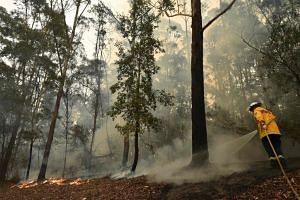 Mr Morrison blamed the incident on a "breakdown of communications".

The PM also noted that the Singapore Armed Forces had offered help and was in discussion with the Australian Defence Force about potential forms of support.

A Defence spokesperson told The Straits Times on Sunday night: "The New Zealand Defence Force and the Singapore Armed Forces have offered, and we have accepted, the provision of support through military assets and personnel. ADF planners are currently engaging with their New Zealand and Singaporean counterparts on the specific details of that assistance."

In NSW and Victoria, military and police conducted evacuations from isolated communities as crews assessed the damage in the worst-hit areas of the Southern Highlands and the Snowy Mountains, west and south-west of Sydney.

Mr David Harrison, 47, died while helping to defend a friend's property in the town of Batlow in the Snowy Mountains, bringing the national toll since September to 24. Four firefighters were injured on the weekend.

Despite cooler temperatures and light rain in the country's south-east, authorities warned that the danger is far from over. Hotter weather is expected to return at the end of the week.

A Victorian fires incident controller, Mr Andy Gillham, said the milder weather was a "slight reprieve" and residents in affected areas should remain ready to evacuate.

"The danger is the fire conditions will return and we are saying to the community, the tourists and anyone else in the fire-affected area, this is simply a reprieve," he added.

Mr Fitzsimmons, the NSW fire chief, said nine blazes continued to pose a serious threat and the risk would increase as temperatures rise again within days.

"The last thing we can afford is for us to become complacent," he said. "Complacency kills."