He posts 74-page racist manifesto on Twitter, and cites key points for his radicalisation

CHRISTCHURCH • An Australian gunman involved in at least one of yesterday's attacks on two New Zealand mosques, which left dozens dead, published a racist manifesto on Twitter before live-streaming his rampage, according to an online analysis by Agence France-Presse (AFP).

The New Zealand government said it could be illegal to share the 17-minute video, which showed the gunman repeatedly shooting at worshippers at close range.

"Police are aware there is extremely distressing footage relating to the incident in Christchurch circulating online," New Zealand police said in a Twitter post. "We would strongly urge that the link not be shared. We are working to have any footage removed."

Through a digital investigation, AFP confirmed the authenticity of the Facebook Live video, which shows a clean-shaven Caucasian man with short hair driving to the Al Noor Mosque in central Christchurch, then shooting as he enters the building.

The manifesto detailing motivations for the attack was posted yesterday morning on a Twitter account with the same name and profile image as the Facebook page that streamed the attack.

Entitled "The Great Replacement", the 74-page document said the gunman had wanted to attack Muslims. The title bears the same name as a conspiracy theory originating in France which believes that European populations are being displaced in their homelands by immigrant groups with higher birth rates.

The manifesto said the gunman identified himself as an Australia-born, 28-year-old white male from a low-income, working-class family. 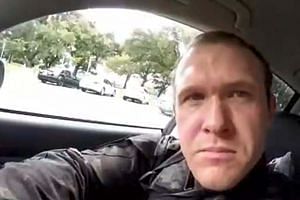 Christchurch shootings: 'I saw people drop dead in front of me'

He said that key points in his radicalisation were the defeat of French far-right leader Marine Le Pen in the 2017 presidential election, and the death of 11-year-old Ebba Akerlund in the 2017 Stockholm truck attack.

Ms Gray said Tarrant worked at the gym after he finished school in 2009 until 2011, when he left to go travelling in Asia and Europe, ABC reported. "He was a very dedicated personal trainer," she said. "He worked in our programme that offered free training to kids in the community, and he was very passionate about that."

She added that Tarrant did not strike her as someone who had an interest in firearms. "Something must have changed in him during the years he spent travelling overseas."

Distinctive writing on the weapons seen in the video footage matched images posted on the Twitter account using the same name that posted the manifesto. The manifesto was the final tweet on the account before it was suspended.

New Zealand last witnessed a mass shooting in 1990, when a man killed 13 people after a dispute with his neighbour in the seaside town of Aramoana. That resulted in tightened gun laws, including restrictions on military-style semi-automatic weapons.

Gun owners must be licensed, a process that includes a review of criminal activity and mental health, and attendance at a safety programme, an explanation of how the gun would be used, a residence visit to ensure secure storage, and testimonials from relatives and friends.

Homicides are rare in New Zealand, and gun deaths even rarer. But there are plenty of guns.

There were 1.2 million registered firearms in the country of 4.6 million people in 2017, according to the Small Arms Survey, a Swiss nonprofit organisation.