A Melbourne court on Friday (March 1) released footage of Australian police interviewing the then Vatican number three in a room in Rome.

Facing accusations that he exposed himself to the boys in the sacristy of Saint Patrick's cathedral in Melbourne in 1996 and 1997, Pell interjects immediately: "Oh, stop it."

The 77-year-old is facing up to 50 years in jail after being convicted on five counts of sexual and indecent assault of the two choirboys, shortly after he became an archbishop.

Pell, who maintains his innocence and has lodged an appeal, was remanded in custody on Wednesday, a day after his conviction was made public.

The interview, which cannot be released in full because it could reveal the identities of those abused, shows Pell issuing explanations that would later form the basis of his failed legal defence. 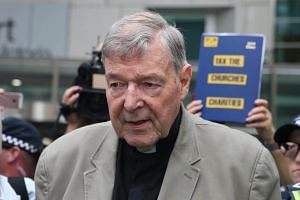 He says the sacristy is a hive of activity at the time of the alleged attack, where "you could scarcely imagine" paedophilia crimes taking place.

"The allegations are the products of fantasy," Pell reads from a statement.

The video comes as Pell's barrister Robert Richter made a public apology over his language in court.

He had earlier angered abuse survivors by arguing that even if Pell had committed the crimes, they were no more than a "plain vanilla sexual penetration case".

On Thursday, after a "sleepless night", Mr Richter apologised, saying he acknowledged the crime's seriousness with "the concession that it merited imprisonment".

"In seeking to mitigate sentence, I used a wholly inappropriate word for which I apologise profusely to all who interpreted it in a way it was never intended," he said in a statement.

"It was in no way meant to belittle or minimise the suffering and hurt suffered by victims of sexual abuse, although in retrospect I can see why it caused great offence to many."

Other prominent Australians have also faced public criticism for their defence of Pell in the wake of the revelations, including former conservative prime ministers John Howard and Mr Tony Abbott.

Mr Howard provided a character reference for Pell, saying "none of these matters alter my opinion of the cardinal" despite the conviction.

Long-time Pell supporter Abbott said it was "shocking" for the cardinal's friends and "devastating" for many Catholics.

Pell is due to be sentenced on March 13.