For nearly two days over New Year, the brothers battled fierce blazes that tore through the family's farms, the flames igniting on multiple fronts and wiping out almost everything in their path.

The pair's father, Robert, and brother, Patrick, died trying to defend their properties. All the family farms were burned to ashes and debris, and hundreds of cattle killed.

"I keep saying to myself that it's not that bad, but it is that bad. It's f***ing terrible," said Mr Tim Stalway, 42, shaking his head in disbelief as he looked at his burnt-out property near the town of Cobargo in New South Wales state.

Mr Warren Stalway fought back tears as he described his anguish at discovering that his brother and father had died, and how other farmers donated their hay to keep his farm going.

"People have just turned up, they all want to help," he said.

The scale of the recovery facing the two fifth-generation farmers is huge.

Destroyed machinery, felled trees and blackened farmland were surrounded by miles of damaged fencing on Mr Tim Stalway's farm. Metal tanks were melted and hay and cattle sheds worth tens of thousands of dollars were flattened.

Mr Tim Stalway lost 170 cows, including one that was so badly burned that it had to be shot.

"They're the only heifers I've got left," he said, pointing to 30 cows gathering curiously, the sky behind them blanketed by haze from fires still burning on the other side of the valley. 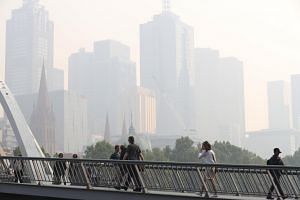 Monster bush fires have razed bush land equivalent to the size of Bulgaria since the start of October, killing 28 people, destroying more than 2,500 homes and killing millions of animals.

"The noise of it was like jumbo jets... It snapped trees in half," Mr Tim Stalway said of the fires that destroyed much of the Cobargo farms.

"I watched the flames get sucked down the hill, there was a boom, an almighty thump. It was my dad and my brother. It's like a bomb's gone off."

Mr Warren Stalway's wife, Helen, who has cancer, took refuge in a nearby town while he raced through smoke-filled lanes to get back to his farm, twice running his truck off the road.

The bush fire crisis deals a further blow to farmers already struggling following a three-year drought, which has been credited with fuelling the fires.

He spent more than a day using a bulldozer and excavator to bury 145 cows and 80 sheep. Many of the cows he found alive had to be shot due to their burns.

"Years and years of breeding and you see them laying in a heap just dead," he said. "That's what you live for, your animals."

Mr Tony Allen, a former local mayor whose own farm had a lucky escape, said the crisis was a wake-up call for policymakers to support an industry already going through tough times.

Mr Tim Stalway said quitting was not on his mind, but he doubted the family business would survive into a sixth generation.

"I've got four kids and unless it improves, none of them will be taking this over," he said.

"Why do you want to do that to them?"