SYDNEY • A split has surfaced in Australia's ruling coalition government over a lawmaker's comparison of the rise of China to that of Nazi Germany.

Conservative MP Andrew Hastie, a former special forces soldier, wrote an opinion piece last Thursday for Channel 9 newspapers comparing the rise of China as an unnoticed existential threat with that of Nazi Germany, prompting a mixed reaction from his colleagues and swift condemnation from Beijing.

Mr Hastie is not a minister but is an influential member of Australia's ruling Liberal-National coalition, and is the chair of Parliament's intelligence and security committee, which is privy to classified information.

His column outlined the dangers of not comprehending China's ideological motivation for building ports and roads, arguing that the West had wrongly calculated that economic liberalisation in China would lead to democratisation.

The split continued to widen over the weekend when Trade Minister Simon Birmingham told his colleagues to watch their words.

"I would certainly encourage any colleague or indeed anybody making comments around sensitive foreign policy matters to pose a couple of questions," he told ABC TV's Insiders programme. "Is the making of those comments in a public way necessary? Is it helpful to Australia's national interests?"

Mr Dave Sharma, a former ambassador to Israel and the Liberal member for Wentworth, tweeted his support for Mr Hastie's analysis last Saturday. "Hastie is right to ring the bell on this issue, and to warn that our greatest vulnerability lies in our thinking," he wrote in his tweet.

He said the comparison with Nazi Germany was valid as both World War I and World War II were caused by the failure to manage Germany's emergence as a major power. 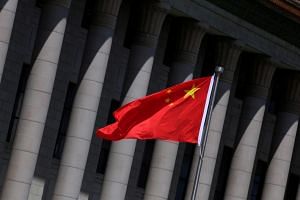 "If the rising power is revisionist in nature, and cannot be accommodated within the existing order - because it fundamentally does not accept the legitimacy of that order - then the future becomes much tougher," he tweeted.

While China and Australia are major trading partners, their relationship has deteriorated in recent years over concerns Beijing is influencing Australia's domestic affairs.

Australia has also strengthened its longstanding alliance with the United States, which has accused China of destabilising the Indo-Pacific.