China's veiled threats to cut its rare earth supply as part of its trade war with the United States have thrown the spotlight on whether Australia - the world's second-biggest producer - can step in to fill the gap.

In recent weeks, Chinese officials and media have flagged the possibility of restricting rare earth exports - a move widely seen as retaliation against the US' tariffs and its placement of Chinese communications giant Huawei on a trade blacklist. China's National Development and Reform Commission confirmed last week that export limitations were being considered.

China's threats have led to questions about whether other resource-rich countries could increase supply - particularly Australia, which produces about 12 per cent of the global supply.

Australia has the sixth-largest known reserves, though much remains untapped.

US defence officials have reportedly approached Canberra to discuss securing supplies of the minerals as part of efforts to minimise China's hold on the sector. The issue has been discussed by Australia's National Security Committee of Cabinet, which is chaired by Prime Minister Scott Morrison and considers major foreign policy and security decisions, according to a report in The Australian Financial Review.

Given the importance of a lot of these minerals for new energy, for batteries, for new technologies, it's a matter of strategic importance both for Australia and the United States and right across Europe, South Korea and Japan.

Australian Defence Minister Linda Reynolds told the newspaper last week that senior ministers had been discussing rare earths and their "strategic importance" for some time.

"We're looking at ways of ensuring those supplies and making sure that all who need access to them can get access to them," she said. "Given the importance of a lot of these minerals for new energy, for batteries, for new technologies, it's a matter of strategic importance both for Australia and the United States and right across Europe, South Korea and Japan."

Rare earths are not particularly rare but can be hard to access and processing them can be costly, energy-intensive and environmentally hazardous.

In recent months, the Australian federal government has sent trade delegations overseas to encourage investment in its rare earth sector and in other strategically important minerals.

It also released a plan in March to encourage the exploration and processing of critical minerals "whose supply may be at risk due to geological scarcity, geopolitical issues, trade policy or other factors".

Australian firm Lynas is the only significant miner and processor of rare earths outside China.

It emerged as a substantial producer after China was accused of suspending exports to Japan in 2010 amid the two countries' competing claims on islands in the East China Sea. Lynas has said it will prioritise US military needs as part of its plans to open a new processing facility in Texas. 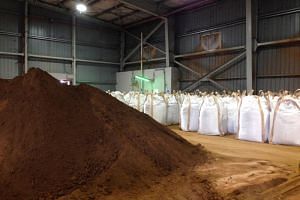 Ms Amanda Lacaze, who has been head of the firm for five years, told Bloomberg earlier this month that Lynas has held discussions with the US Department of Defence "pretty much for as long as I've been in the job and I'm thinking before that as well".

Other Australian firms have also been looking to develop rare earth mining projects across the country.

These include Arafura Resources, which wants to develop a A$1.1 billion (S$1 billion) project in the Northern Territory.

However, international trade expert Jeffrey Wilson, from the Perth USAsia Centre, said short-term efforts by the US to find Australian and other non-Chinese suppliers will not provide "a robust defence against rare earth coercion in its trade war with China".

He said developing processing facilities would take years and may even encourage Beijing to deploy its "rare earth weapon" sooner if it fears losing its near-monopoly. But he said it was crucial for countries outside China to focus not merely on mining rare earths but also on refining and processing them.

"It is simply not sustainable to rely on a single supplier for four-fifths of an essential industrial input," he wrote on the Lowy Institute's Interpreter website last Tuesday. "New and more diverse value chains must be established to secure the foundations of global technology industries."