SYDNEY • China said yesterday it "strongly deplores" comments by the head of Australia's parliamentary intelligence committee, who likened the West's attitude to China to the inadequate French response to the World War II advances of Nazi Germany.

The Chinese Embassy in Australia said in a statement that Australian lawmaker Andrew Hastie had a "Cold-War mentality and ideological bias".

"It goes against the world trend of peace, cooperation and development," the embassy said on its website. "It is detrimental to China-Australian relations."

While China and Australia are major trading partners, their relationship has deteriorated in recent years over Canberra's concerns that Beijing is influencing its domestic affairs.

Australia has also strengthened its long-standing alliance with the United States, which has accused China of destabilising the Indo-Pacific.

Mr Hastie is a federal member of Australia's Liberal Party, which leads the ruling coalition.

He is a conservative lawmaker and former special forces soldier.

In an opinion piece in Channel 9 newspapers yesterday, Mr Hastie argued that the West had wrongly calculated that economic liberalisation in China would lead to democratisation.

In World War II, France had failed to appreciate the "evolution of mobile warfare", believing its defences would guard against the German advance in 1940, he said. 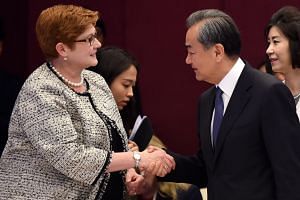 "Like the French, Australia has failed to see how mobile our authoritarian neighbour has become," he wrote.

The diplomatic flare-up yesterday coincided with the appointment of Mr Mike Burgess as head of the Australian Security Intelligence Organisation.

He said this after meeting his Australian counterpart Marise Payne on the sidelines of an Asean summit in Bangkok.