YENNORA, AUSTRALIA (REUTERS) - Auctioneer Ian Sharp has been selling Australian agricultural products to the highest bidder since 1968, and he has never seen demand like this before.

Earlier this year, the benchmark price for fine Australian merino wool gained a foothold above the once mythic A$20-per-kilogramme (S$19.80) price, as one of Australia's worst-ever droughts leaves farmers struggling to keep flocks fed.

The surge, up 20 per cent in a year, has confounded buyers who have waited in vain for prices to fall, as they have done previously.

"This is very exciting for an old auctioneer like me in the fact that we are selling at these prices and we are clearing a lot of wool," Mr Sharp told Reuters, shortly before an auction at one of the country's biggest wool-selling sites, in Sydney's western suburb of Yennora.

Australia controls 90 per cent of global fine-wool exports, where demand is being driven by Chinese wool mills and Italian garment makers, according to wool brokers at the Yennora auction.

While wool has long been used by suit-makers, the surge in popularity is being driven by fitness and leisure clothing manufacturers looking for soft, durable and natural fibres. 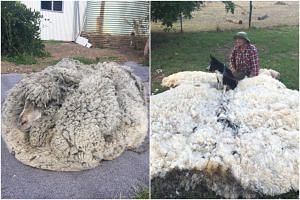 Shaggy sheep in Australia finally gets a shave, farmer ends up with 30kg fleece

But the drought savaging Australia's east, where the bulk of the country's wool is produced, is hitting flock numbers, leading to lower production, threats to quality, and higher prices.

Like any commodity, wool has had its ups and downs, with sharp price spikes followed by troughs.

Wool buyers say this has prompted many overseas buyers to run down their stocks and wait for prices to fall.

"I think going back a few months, people were prepared to believe this market could correct in a big way - that's gone now," said Mr Peter Brice of Australian Merino Exports, which has a big base of Chinese clients who mill the raw wool into fabric.

"We think from October onwards they will need to stock the pipeline up again knowing the further we go, the less wool there will be. The threat of a fairly dramatic reduction in supply next year is really underpinning this market and I think the Chinese in particular now appreciate that."

Many Australian farmers, meanwhile, are selling their older sheep to reduce their exposure to rocketing feed costs as the drought lingers, and to take advantage of high mutton prices.

Lamb and sheep sales are running at around 15 per cent more than this time last year at the large sale yards in the New South Wales regional city of Wagga Wagga, according to livestock agent Isaac Hill.

Sheep numbers are also expected to fall this year, down 3 per cent to 69.1 million, according to ABARES.

The supply imbalance is hard to correct. While New Zealand, South Africa and Argentina also export merino wool, it takes years to build flocks, making it difficult for other countries to quickly respond to demand.

The question of what happens next in the wool market is complicated by its opaque nature, according to analysts.

Unlike more transparent markets such as cotton, analysts have a much harder time looking through the wool supply chain to measure global stock levels and anticipated demand.

Wool traders at the Yennora auction told Reuters more dust was turning up in the wool as a result of the drought, although the overall quality was still sound.

If rural conditions deteriorate, dirt and other impurities will start to reduce the quality of the fleeces. Under-fed sheep could also be a problem, given they produce weaker fibres.

"There is difficulty passing on these prices down the pipeline - so far the shortage of supply has ensured the wool has kept flowing because there is demand for the final product and so that pulls the wool through system."

Manufacturers may start decreasing the wool content, substituting in lower-cost fibres such as cotton and polyester, when they renegotiate new season production contracts, according to a September note by forecaster ABARES.

Any substitution is expected to occur with lower-margin, mass-produced garments, as opposed to tailored suits, for example.

"Additionally, we reduce our exposure to fluctuations by purchasing at favourable times," said Uniqlo, which is owned by Fast Retailing.

On the Yennora sale-room floor, buyers are showing no sign of holding back.

Mr Sharp, the chief auctioneer at Macdonald & Co Woolbrokers, uses an abbreviated swing of his gavel to swiftly work through the day's offerings.

In short order, he has sold 75 lots of wool, representing 316 bales of high quality fleece.

"The culmination of my job is that moment when I stand in the auctioneer's blocks and I knock the hammer down," he said.

"Whether it's good or bad, you need to do your best to get as much money out of the room you can."