The ruling coalition in Australia's most populous state of New South Wales easily defeated the Labor opposition in an election yesterday that delivered a welcome boost to Prime Minister Scott Morrison ahead of a looming federal poll.

Also, Premier Gladys Berejiklian became the first woman leader to win an election in the state, though it was not clear last night if her Liberal-National coalition will have an outright majority or will be forced to rule as a minority government.

As counting continued, the coalition was expected to win 45 of 93 seats in the Lower House, with Labor winning 35, eight going to minor parties and independents and five seats still unclear.

In a victory speech in Sydney, Ms Berejiklian praised a state in which "someone with a long surname - and a woman - can be the Premier".

"My team and I will continue to work our guts out to make sure this state and its people continue to ensure that we have the best opportunities on this planet," she said.

The result was disappointing for the state Labor Party, with its loss appearing to be partly due to comments by its leader, Mr Michael Daley, blaming Asian migrants in Sydney for making house prices unaffordable.

But voters also appeared to back Ms Berejiklian's big-spending plans to build new rail and road networks and to provide funding to assist parents with after-school care for primary school pupils. 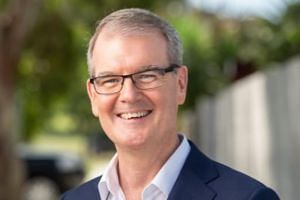 Ms Berejiklian, the daughter of Armenian migrants and a former banking executive, is seen as a hard-working, disciplined, unshowy pragmatist, but she ran an uninspiring election campaign which raised concerns that Labor could win.

However, Mr Daley's comments, which he apologised for, along with Ms Berejiklian's clear debate victory over him, helped her to clinch victory in the final days.

The election was seen as an indicator of the likely fortunes of Mr Morrison ahead of a federal election, which is due to be held in May. Mr Morrison trails badly in the polls and his coalition has suffered from years of bitter internal warfare between its moderate and conservative wings.

But the NSW result will give the federal coalition hope that it can still hold on to several key seats across western Sydney.

Mr Morrison, whose electorate is in Sydney, was beaming as he congratulated Ms Berejiklian on her win, adding: "In two months from now, we'll be back here celebrating another Liberal-National government returned to office."

With almost 60 per cent of the ballots counted last night, all major parties - the Liberals, Labor and the rural-based Nationals - saw their votes decline compared with the 2015 election.

The state coalition was expected to suffer an overall 2.3 per cent swing against it and was on track to lose two seats, one to Labor and one to the rural-focused Shooters, Fishers & Farmers Party.

New South Wales, with a population of about eight million, has a strong economy, with an unemployment rate of 4.3 per cent, the lowest of any state in Australia.

Labor ruled from 1995 to 2011 but the coalition has now won three successive elections. Ms Berejiklian became Premier after her predecessor, Mr Mike Baird, resigned in 2017.

Mr Daley's leadership is likely to come under pressure, especially as several of his colleagues blamed his comments about Asian migrants for Labor's disappointing result.

"The debate and the comments on that video... they were two major setbacks for us," Labor MP Jodi McKay told ABC News.

The Greens were expected to win three seats, with three going to independents and two to the Shooters, Fishers & Farmers Party, which campaigned on rural concerns about the water supply and health services.

If the coalition fails to win a majority, it will need the support of several of these cross-bench MPs.

In the Upper House, no party was expected to win a clear majority. A controversial former federal Labor leader, Mr Mark Latham, who has become known in recent years as a provocative right-wing commentator, was set to be elected as an MP for Ms Pauline Hanson's anti-migrant One Nation party.