SYDNEY - Much of Australia has for almost three months been battling serious Covid-19 outbreaks that have led to stringent lockdowns and brought a sudden end to the nation's economic recovery.

But there has been one notable exception: the state of Western Australia (WA), where there are no recent cases of Covid-19, minimal use of face masks, and business is booming.

Last week, the state confirmed just how different its current experience is to much of the rest of the country and the world, revealing that it had recorded its biggest annual budget surplus. Fuelled by a mining boom and strong Chinese demand for iron ore, the state had a surplus of A$5.6 billion (S$5.5 billion), more than double its previous record, which was set in 2007. All other states in Australia are due to record deficits.

Seizing on the figures, the state's premier, Mr Mark McGowan, said WA's efforts to "crush" Covid-19 had left it with one of the strongest economies in the world.

"Even in the middle of a global pandemic, unlike any other jurisdiction, Western Australia's financial position is strong and on a sustainable footing," he said.

"By keeping the state safe from Covid-19, we have delivered the best economic and social outcomes in Australia and possibly the world."

But WA's approach has been heavily criticised by the federal government and some other state leaders.

The WA government has barred entry from most Australian states and has rejected a Canberra-backed plan to allow interstate travel when vaccination rates reach 80 per cent. As at Tuesday, 43.2 per cent of Australian residents aged 16 and over had been fully vaccinated.  WA has one of the lowest vaccination rates  among all states, though, with 39.4 per cent fully vaccinated.

Mr McGowan has insisted that he does not want to "import the virus".

"I don't want us to end up like NSW," he said last week. "We're going to fight like hell to stop that from occurring."

Prime Minister Scott Morrison has condemned Mr McGowan for "underselling Western Australians", saying the state's residents were keen to re-engage with the rest of the country and to potentially visit family and friends during the Christmas holidays in December.

WA has also had a dispute with the airline Qantas, which has attacked the state's strict border rules. Qantas has warned it may no longer use Perth, the state's capital, as the base for non-stop flights to London and may instead use Darwin as a transit point.

WA's government has also been attacked by NSW over the allocation of federal tax revenues. NSW Treasurer Dominic Perrottet suggested that Mr McGowan was obsessed with hoarding a big share of the federal goods and services tax revenues, likening WA's leader to Gollum, a character in The Lord Of The Rings movies.

"Mark McGowan is the Gollum of Australian politics," Mr Perrottet told Sky News. "You can just picture him over there in his cave with his little precious, the GST."

Mr McGowan responded: "If it's a cave, it's a pretty good cave... We're certainly the most free and open society in Australia, and perhaps the world."

Most people in WA seem to agree. Polls indicate strong support for the state's stringent approach.

At a bustling cafe in Perth, the owner, Mr Oliver Tallis, told the WAtoday website recently that he welcomed the draconian measures, which had enabled people to "live a normal life".

"It's hard to fault it when you still get to run your business and hang out and do stuff," he said.

Later this month, the state will enjoy an additional reward. Perth will host one of the nation's biggest sporting events - the Australian Football League grand final - after the usual host, Melbourne, was ruled out because of its Covid-19 outbreak. It is expected to deliver another windfall to the state's overflowing coffers.

Still, the vaccine roll-out is continuing in WA and the state is preparing to end its isolation, but has indicated it will do so a little later than everyone else. 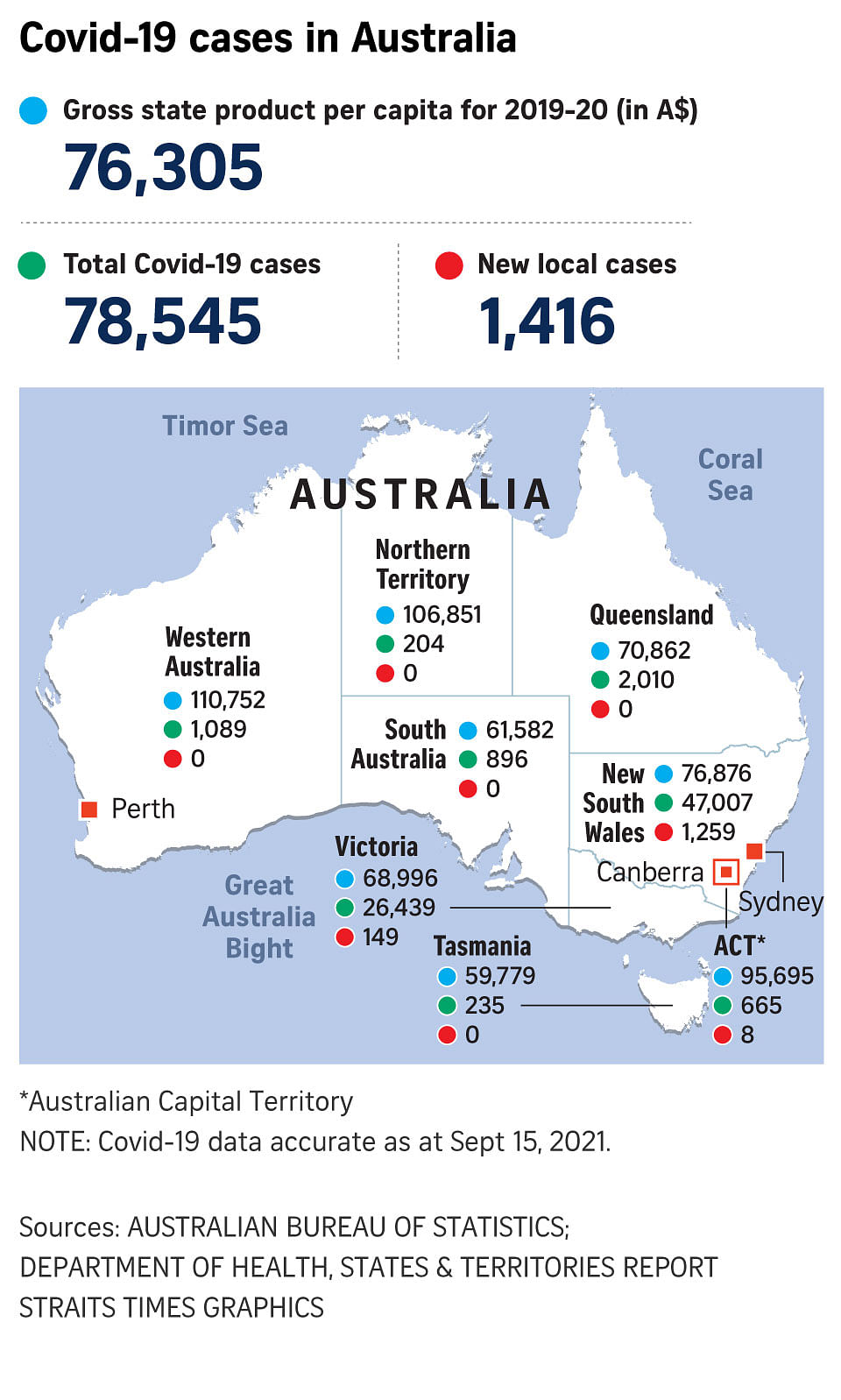