MELBOURNE (NYTIMES) - The victims were carried in one by one, their paws burned and fur singed, suffering from dehydration and fear. Their caretakers bandaged their wounds, swaddled them and laid them in baskets with the only thing that was familiar - the leaves of a eucalyptus tree.

As catastrophic fires burned more than two million acres in Australia, dozens of koalas have been rescued from smouldering trees and ashen ground. The animals, already threatened as a species before these latest blazes ravaged a crucial habitat, are being treated in rescue centres and at least one private home along the country's east coast.

"They are terrified," said Ms Cheyne Flanagan, clinical director of the Koala Hospital in Port Macquarie, the only facility of its kind in the world. She added that what was happening to the koalas was "a national tragedy".

Officials at the hospital began warning weeks ago, when the fires first ignited around Port Macquarie, about 400km north of Sydney, that hundreds of koalas may have been "incinerated". Rescuers have not yet been able to confirm the scope of the loss because some of the blazes are still raging.

The plight of the koala - a national symbol of Australia - has raised questions among conservationists and scientists about what it will take to preserve biodiversity in a country increasingly prone to intense fire, extreme heat and water scarcity, and which already has among the highest rates of species extinction in the world.

While koalas have evolved to exist alongside wildfires, the animals are facing new threats not just from climate change but also from human development, which has dislocated local populations, impairing their ability to survive fires. In some regions, scientists said, koalas' numbers have declined by up to 80 per cent, though it is difficult to know how many remain across Australia.

"We have these unique animals not found anywhere else on this planet, and we're killing them," Ms Flanagan said. "This is a big wake-up call."

The animal distress goes beyond koalas. Recently, tens of thousands of bats plummeted from the sky in temperatures exceeding 41.6 deg C in northern Australia. Kangaroos, parched by drought, decimated the grapes on a vineyard in Canberra. And waterfowl in the Macquarie Marshes, a wildlife haven in north-west New South Wales, have been affected by a fire in their habitat.

"It's a swamp, for goodness' sake; it's burning," said Professor David Bowman, a professor of pyrogeography and fire science at the University of Tasmania. The current bush fires, the earlier burning of rainforests and a continuing extreme drought, he said, are all "warning lights" that ecosystems have been pushed far beyond their normal patterns. 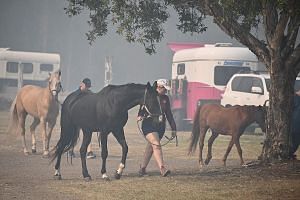 Reluctant Aussies flee as fires approach Sydney; danger not over yet

Climate change and other human impacts have so altered the landscape that the government needs to urgently rethink its approach to conservation, Prof Bowman said, suggesting interventions like irrigating, feeding and relocating animals. "You want koalas?" he said. "That's what we've got to do."

In the weeks that the fires have been burning around Port Macquarie, more than two-thirds of the habitat of a local population of koalas in the forest surrounding two lakes has been decimated, conservationists said.

They estimated that 350 of the nearly 700 koalas that lived in the region had been killed. As of Thursday (Nov 14), 22 adult koalas and one joey had been rescued. They are being treated at the Koala Hospital along with dozens of other animals, including kangaroos and possums that were injured in dog attacks or car accidents - often the collateral damage of creatures searching for a new home after a disaster.

Koalas, unlike kangaroos, birds or snakes, do not flee from fires but instead scale trees to the canopy, where they can curl themselves into a ball for protection and wait for the danger to pass.

But during high-intensity fires, such as those that have burned in recent weeks, the animals, conservationists said, are far less likely to survive. Even if the fire itself does not reach the tree canopy, the animals may overheat and fall to the ground, where they can be burned to death. They can also suffer smoke inhalation or burn their paws or claws when trying to climb down trees.

Claws, crucial for life in the wild, do not grow back. "A koala who can't climb can't survive," said Ms Sue Ashton, director of the Koala Hospital.

She said that while the hospital hoped to rehabilitate and eventually release the animals, it was likely that some would have to be euthanised. That, she added, would be a further blow to conservation efforts.

Although the fires are still burning, a rescue team led by the hospital began to search the periphery last week, walking in a human chain, their necks strained toward the tree canopy, searching for survivors.

The rescuers described a lifeless scene free of birds and insects, with the forest undergrowth gone, reeds burned in a creek, and hollowed-out trees still smoking.

"This fire is currently still burning," said Mr Scott Castle, assistant clinical director at the hospital, who participated in the effort. "So," he added, "there's a lot more to search."