SYDNEY - For years, it was the oft-forgotten piece of Australia, which was sometimes left off maps and saddled with one of the worst-performing economies among all the states in the country.

But the island Tasmania, off the southeast corner of the mainland, is undergoing something of a boom. Surging tourism, growing exports and a thriving property and construction sector have helped fuel growth and led unemployment to drop to 6 per cent, its lowest level in about five years.

The boom has partly occurred because there has been an exodus of people moving to the island to escape the unaffordable property prices and growing congestion of the nation's biggest cities, Sydney and Melbourne.

Explaining the property boom, Mr Hans Waldhoff, a property consultant from Elders Real Estate-Brown & Banks, said growing interest from people across the country had led to a huge demand in Hobart, a harbour city with a population of about 220,000.

"Australians are visiting Hobart on holiday and realising what a wonderful place this is to live in, and what a marvellous city to invest in with prices only a fraction of what they pay elsewhere," Mr Waldhoff told the Domain website on February 1.

"As a result, they're buying up big time and with so little product left for sale on the market, that strong price growth will continue well into the future."

Some of the recent migrants include Dr Ruth Quibell, a sociologist and writer, and her husband, Dr Damon Young, a philosopher and author, who moved from Melbourne to Hobart in November along with their children aged 9 and 12. The pair said they knew some people who had already moved there who they planned to work and spend time with.

In an interview with Hobart's Mercury newspaper last month, Dr Quibell said they were attracted by the lifestyle and the natural beauty.

"I grew up with the mountains and Damon grew up near the beach," she said. "And Hobart offered that combination."

Tasmania, a former British penal colony, was long derided as Australia's backwater - a state with high unemployment and large pockets of disadvantage. But it has experienced a dramatic turnaround in recent years. It has a thriving wine and spirits industry, as well as highly-rated restaurants and cafes, which have all helped to fuel tourism and exports.

The state has a population of 520,000 but its government wants to increase this to 650,000 by 2050. In January, the state's Growth Minister, Mr Peter Gutwein, launched an advertising campaign to lure people from Sydney, promoting the island's relaxed and stress-free lifestyle.

"At the moment, Tasmania is the hottest place on the planet and we want to ensure that the rest of the country knows that," Mr Gutwein told ABC News.

"In Sydney, you can spend up to 12 hours a week travelling to work. In Tasmania some people will spend around 12 minutes."

According to the latest analysis of Australian state performances by broking firm Commsec in January, Tasmania now has the nation's highest population growth, rising 0.64 per cent in the past three months. Tasmania ranked as the fourth-strongest economy, a big improvement since the first such analysis in 2015 when it was in last place.

Internationally, the state had a boost when Chinese President Xi Jinping chose to visit during a trip to Australia in 2014. Mr Xi said he had visited every other state and territory in Australia and wanted to see Tasmania.

It was the highest-level state visit in island's history and has led to growing business ties, including Chinese investment in local tourism, wine, fruit and dairy enterprises.

But not all are happy with the changes in the state. 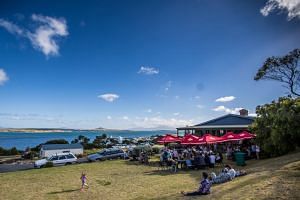 The property boom has left Hobart with almost no rental vacancies and a severe shortage of properties for sale, prompting fears of growing homelessness.

She added: "We have to look at how we ensure that we can house our own population before we look at bringing in a higher number of people from interstate."