SYDNEY (REUTERS) - A state branch of the Australian National Party has pulled its support for Deputy Prime Minister Barnaby Joyce because of his extramarital affair, its leader said on Tuesday (Feb 20), opening a new rift in the ruling coalition.

Prime Minister Malcolm Turnbull, who introduced a ban on sexual relationships between ministers and their staff last Thursday, said Mr Joyce had shown a "shocking error of judgment" by conducting an affair with his former press secretary, who is now pregnant.

Mr Joyce, the National Party's federal leader, has refused to resign, maintaining he has the support of his party.

But the Western Australian branch of the party disagreed.

"Mr Joyce's actions have caused pain for his family but it is the ongoing damage Mr Joyce is causing the Nationals' organisation that is of greatest concern to me."

As the National Party leader, Mr Joyce is automatically deputy prime minister under the conventions of a century-old coalition between his rural party and the conservative Liberals. 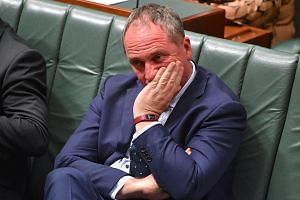 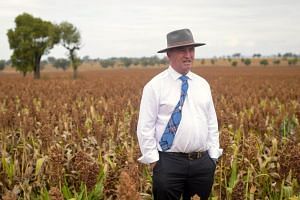 The move adds fuel to a political storm which has held newspaper front pages for weeks.

Mr Joyce, who rose to global attention by deporting two undeclared dogs owned by actor Johnny Depp in 2015, has campaigned as a Catholic with traditional family values.

Still, none of the 16 National Party members of Australia's 150-seat federal parliament is from Western Australia so a loss of support from a state branch with no federal parliamentary presence would not destabilise a government despite its majority of only one seat.

"I find it surprising that a federal issue has so much momentum in the west when people in the east in the National Party have, in the majority, a different view and... vastly more skin in the game," the Sydney Morning Herald quoted Mr Joyce as saying.

Two-thirds of Australian voters want Mr Joyce to resign over the affair, according to The Australian newspaper's Newspoll, and there is concern that disapproval could lead to fewer votes in state-based elections.

Veteran West Australian political analyst David Black said it was unusual for the state branch to withdraw support for a federal leader.

"He didn't just refuse to resign but came out swinging."

The National Party's Western Australian branch is under pressure following a poor performance in the 2017 state election. The mineral-rich state is scheduled to go to the polls again in 2021.

"The Nationals' brand across regional Western Australia has suffered as a result of Mr Joyce's actions and he has become a distraction at both federal and state level," the state leader, Ms Davies, said.