But much has changed in the past 10 months.

Mr Morrison will today begin an unusually long trip to the US - an eight-day visit which will include a rare State Dinner. The only other leader to have received such an honour from Mr Trump was French President Emmanuel Macron.

Mr Morrison's visit will include a trip, accompanied by Mr Trump, to Ohio to visit a new Australian-owned paper recycling mill. He will also meet senior figures in the US administration, including Vice-President Mike Pence, Secretary of State Mike Pompeo and Secretary of Defence Mark Esper.

For Mr Morrison, the trip appears designed to demonstrate that Australia remains firmly committed to its ties with the US, its closest ally.

Despite questions about the US' commitment to supporting allies in the Asia-Pacific, particularly under Mr Trump, Mr Morrison has signalled he intends to try to keep Washington engaged with the region.

"There are a lot of tensions globally and the US is our biggest and greatest ally and a very important partner," Mr Morrison told Channel Seven yesterday. "We can never take our relationship with the United States for granted… I take it seriously and it is bigger than prime ministers and presidents, it's about our people, it's about our shared values."

Mr Trump seemed to be particularly impressed by Mr Morrison's surprise election win in May. Like Mr Trump in 2016, Mr Morrison had been widely tipped by pundits and pollsters to lose.

"He didn't surprise me, but he surprised a lot of people," Mr Trump said after they met in June in Japan. 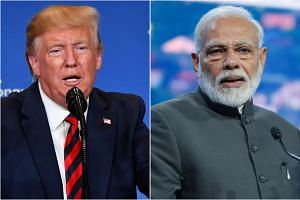 In show of bond, Trump to join Modi in mass Houston rally; will also meet Australian PM Morrison in Ohio

Mr Morrison has also shown stronger support for Mr Trump's position in the trade war with China than most other world leaders. And he has committed Australian troops to join a US-led coalition to protect shipping in the Strait of Hormuz, just the third country to do so after Britain and Bahrain.

Importantly, Australia has a trade deficit with the US and is therefore immune from Mr Trump's claims that countries such as China, which are large exporters to the US, are "ripping us off".

But it has not joined American freedom of navigation patrols to contest Chinese claims in the South China Sea and has resisted the Cold War-style anti-China rhetoric emerging from Washington.

Some analysts have urged Mr Morrison to use his time with Mr Trump to speak candidly about China and to encourage Washington to avoid seeking to contain Beijing.

Foreign affairs commentator Tony Walker wrote in The Sydney Morning Herald that Mr Morrison should "use whatever leverage he has with his host to persuade him to make a trade deal with China that will not involve a loss of face on the Chinese side".

Executive director of the Australian Strategic Policy Institute, Mr Peter Jennings, said Mr Morrison should offer ways to boost security cooperation with the US to try to cement continued US engagement in the region.

"The challenge for Morrison is to show how Australia adds material value to US security in the Indo-Pacific," he wrote in The Australian.

The visit comes amid heightened tensions between the US and Iran, which could interfere with Mr Morrison's trip.

Asked whether Australia would support a US call for action against Iran, he said yesterday: "It's very premature and none is being asked for."

A version of this article appeared in the print edition of The Straits Times on September 19, 2019, with the headline 'Australian PM to be feted by Trump on state visit'. Subscribe
Topics:
More
Whatsapp Linkedin FB Messenger Telegram Reddit WeChat Pinterest Print Purchase Article Copy permalink