SYDNEY (WASHINGTON POST) - In drought-stricken areas of Australia, recent weather forecasts have brought only more bad news for farmers struggling to keep their farms and cattle alive: Experts say there will probably be nothing but dry skies for the next three months.

To help farmers deal with the dry weather conditions, the government of New South Wales, Australia's most populous state, has loosened restrictions on shooting kangaroos, as complaints emerged that the wild animals are encroaching on farmers' pastures and grazing in areas they need to keep their cattle alive.

The number of kangaroos in the state, said Niall Blair, the New South Wales minister of primary industries, has reached "plague proportions," according to the Australian Broadcasting Corp.

"Many farmers are taking livestock off their paddocks, only to then see kangaroos move in and take whatever is left," he said. "If we don't manage this situation, we will start to see tens of thousands of kangaroos starving and suffering, ultimately leading to a major animal welfare crisis."

Wild animals moving closer to human populations is a common side effect of drought, Amir AghaKouchak, a civil and environmental engineering professor at the University of California at Irvine, told The Washington Post.

"It happens all the time - in Australia with kangaroos, and in some other countries, even cheetahs and jaguars get closer to farms when there's a lack of water," he said.

Some observers worry that the drought's longevity is pushing Australian farmers to the brink.

On Sunday, Prime Minister Malcolm Turnbull introduced a US$141 million (S$193 million) package intended to help farmers cope with the lack of rain, which includes payments to make up for lost income and increased mental-health support.

The Australian Associated Press reported that those living in drought-stricken regions who need counseling will be able to access mental-health professionals by phone and Skype instead of having to travel long distances for appointments. 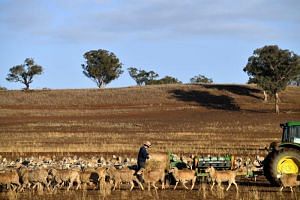 The government has committed around US$500 million to drought relief in addition to relief programs funded by the state government in New South Wales.

"These are very exceptional circumstances, and it's important that we react and respond with the support that farmers need," the prime minister told reporters on Sunday.

AghaKouchack said the situation in New South Wales "looks like the most extreme in the past 50 years," calling the mental-health programs "very progressive."

While many people may naturally point the finger at climate change, he said scientists are reluctant to do so because the drought was probably brought on by a combination of factors. But observed global warming, AghaKouchack said, "has contributed to the severity of droughts."

As for the kangaroos? Shooting them is not an entirely new phenomenon in Australia, where around 1 million were expected to be slaughtered last year to protect grasslands and other wildlife.

Still, many worry that loosening restrictions on kangaroo hunting could wind up hurting the species.

"We see this as probably the worst possible outcome for the kangaroo," said Ray Borda, president of the Kangaroo Industries Association of Australia to the ABC. "But I've got to emphasise we do understand the plight that farmers are in."