SYDNEY (REUTERS) - Two more ministers in Australian Prime Minister Scott Morrison's Cabinet said on Saturday (March 2) they will not contest elections due in May, adding to a flurry of high-profile resignations as opinion polls suggest the centre-right government faces a heavy defeat.

Mr Morrison will need to retain all the parliamentary seats held by his coalition government, but his chances are weakened by a wave of incumbent lawmakers in marginal seats set to retire.

Defence Minister Christopher Pyne and Defence Industry Minister Steven Ciobo both announced on Saturday morning that they would not stand in the coming election.

Mr Morrison said Ms Reynolds would become Defence Minister should his government be returned to power.

"We have two members of the Cabinet who have decided not to re-contest the next election. That's true," Mr Morrison said in a televised news conference from Canberra.

"What has also changed today is we have elevated Senator Reynolds into the Cabinet, which means there will now be seven women in Cabinet."

Mr Morrison said it was important for Mr Pyne, who was responsible for a A$200 billion (S$192 billion) build-up of Australia's military capability, to retain his portfolio until the election.

"In Christopher Pyne's portfolio, we are dealing with some quite sensitive issues," he said.

The prime minister said he intended to fill any other vacancies after the next election. 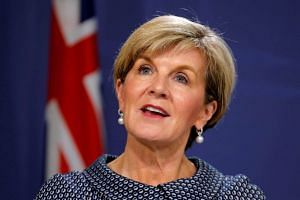 A Newspoll for The Australian newspaper showed the opposition Labor party retained a lead of 53 per cent to 47 per cent over the Liberal-National government last month, unchanged from the poll in December.