SYDNEY (REUTERS) - An unrelenting drought in parts of eastern Australia is expected to weigh on economic growth this year even if average rainfall returns soon, a senior central banker said on Tuesday (March 12).

While the impact of climate change is usually most severe on agriculture, global warming presents significant risks and opportunities for a broader part of the A$1.9 trillion (S$1.82 trillion) economy, he said.

In his speech titled 'Climate Change And The Economy', Debelle said monetary policy was always focused on analysing and assessing a large number of forces.

"But few of these forces have the scale, persistence and systemic risk of climate change," he said.

"What if droughts are more frequent, or cyclones happen more often? The supply shock is no longer temporary but close to permanent," Debelle added.

Australia suffered its third warmest year on record in 2018, marked by drought and a prolonged bushfire season, with maximum temperatures about 1.55 degrees Celsius above average across the country. 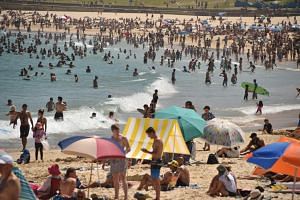 Drought-hit Australia had third-warmest year on record in 2018

"The challenges we have to address are to take the outcomes from climate modelling and map them into our economic modelling," Debelle said.

The RBA is consulting with businesses through its liaison program, and in talks with climate modellers to inform its monetary policy decision-making, he added.

Last year, the bank joined the Network for Greening the Financial System, a group of central banks that are examining climate issues.

The RBA's approach contrasts with a decade of political deadlock over climate and clean energy policies in resource-rich Australia, where coal is its biggest export earner.

The absence of a stable carbon policy over the past decade has resulted in underinvestment in energy generation, which has led to soaring power prices.

However, Debelle pointed to a pick-up in investment spending on renewable energy in recent years.

"It has been big enough to have a noticeable impact at the macroeconomic level and affect aggregate output and hence the monetary policy calculus," he said.

"How these price and investment developments evolve over the coming years is something we are playing close attention to, given the importance of the cost of electricity in inflation both directly to households and indirectly as a significant input to businesses," he said.