Confrontation must not define relations between the two powers: PM Morrison

In his first major foreign policy speech, Mr Morrison tried to tread a careful line between Australia's alliance with the United States and engaging a rapidly and evermore assertive China.

"Inevitably, in the period ahead, we will be navigating a higher degree of US-China strategic competition," he told the Asia Society Australia in Sydney.

"It is important that US-China relations do not become defined by confrontation," he said, against a backdrop of the two economic behemoths trading sanctions and counter-sanctions in a growing trade dispute.

Australia - a member of the "Five Eyes" Western intelligence alliance and with long-standing and close military ties with Washington - finds itself slap-bang in the middle of one of the 21st century's geopolitical hot spots.

A quiet battle is raging for influence in the South Pacific - a region of small island states that is vital to international shipping and provides a stepping stone for Beijing and Washington to project military and economic power across the Pacific region.

"As economic power shifts, it's unsurprising that nations will seek to play a bigger strategic role in our region," Mr Morrison said.

We hope relevant countries can discard the Cold War and zero-sum game mentality and view China's relationship with Pacific countries in an objective way.

"China, in particular, is exercising unprecedented influence in the Indo-Pacific. China is the country that is most changing the balance of power, sometimes in ways that challenge important US interests."

While stressing ties with the US are vital to Australia's security, he said relations with China must be kept on an even keel.

Rhetoric between Canberra and Beijing has been heightened by Australia's decision to bar Chinese state-linked telecoms firms from operating Australia's new 5G network on the grounds that they pose a security risk. 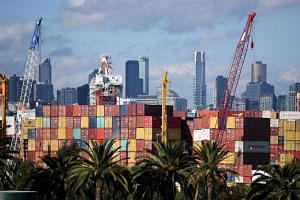 Beijing has been extending billions of dollars in infrastructure loans to tiny island nations across the Pacific, and is reportedly talking to Vanuatu about the possibility of opening a military base there.

Mr Morrison, who came to office in August, indicated Australia would also push its own influence. He announced an initiative to develop the Lombrum military base in Manus, Papua New Guinea (PNG).

PNG has said this year that China was interested in funding the re-development of a navy base on Manus Island, an offer that diplomatic sources said worried Australia and its Western allies.

Mr Morrison said yesterday: "I will formally commit to a joint initiative to develop the base on Manus Island."

"We hope relevant countries can discard the Cold War and zero-sum game mentality and view China's relationship with Pacific countries in an objective way," Mr Lu said at a regular news briefing in Beijing.

A version of this article appeared in the print edition of The Straits Times on November 02, 2018, with the headline 'Australia warns against rising China, US rivalry'. Subscribe
Topics:
More
Whatsapp Linkedin FB Messenger Telegram Reddit WeChat Pinterest Print Copy permalink