At least 75 tonnes of heavy fuel oil has spilled from Hong Kong-flagged bulk carrier Solomon Trader since Cyclone Oma drove it onto a reef at Rennell Island on Feb 5.

The ship was carrying 700 tonnes of oil when it ran aground and there are fears the remaining fuel will spoil Rennell Island, the world's largest raised coral atoll and home to many species found nowhere else.

"Australia remains extremely concerned by the ongoing risk of a major oil spill," said Foreign Minister Marise Payne in a release on Sunday.

"Up to 75 tonnes of heavy fuel oil from the ship has dispersed across the Island's sea and shoreline, contaminating the ecologically delicate area."

She added: "Given escalating ecological damage, and a lack of action by commercial entities involved, the Solomon Islands Government has requested Australia's assistance."

Australia was sending equipment, vessels and experts under the leadership of the Australian Maritime Safety Authority.

The eastern half of Rennell Island was the first natural property to be inscribed on the World Heritage List with customary management, and is home to 1,200 Polynesians who live by subsistence farming, hunting and fishing, the United Nations Educational Scientific and Cultural Organisation (Unesco) website showed. 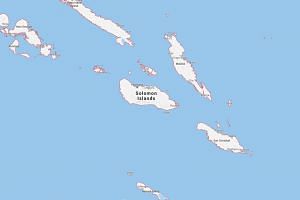 The United Nations body describes the site, with its unique limestone formations, a large lake and dense forest, as "a true natural laboratory for scientific study".

Unesco listed East Rennell as "in danger" in 2013 for threats posed by commercial logging of its forests for export to China and the introduction of rats.

Indonesian firm Bintan Mining chartered the ship to take bauxite from its mine on the western half of Rennell Island to China. Bintan Mining could not be immediately reached for comment.

The bulk carrier ran aground while loading bauxite during a cyclone, Radio New Zealand reported.

Australia's Department of Foreign Affairs and Trade said on its website last Thursday that oil had leaked for 6km across the shore.

"There is a high risk remaining heavy fuel oil on the vessel (currently estimated at over 600 tonnes) will be released into the surrounding area," the foreign affairs department said.

"Australia is supporting the Solomon Islands government to hold the responsible commercial entities to account."