SYDNEY (Reuters) - Australia's parliament voted down a labour reform Bill on Monday (April 18), handing conservative Prime Minister Malcolm Turnbull the excuse he has sought to dissolve both houses and hold a general election in July.

In an outcome that was unexpected only in terms of how quickly it was reached, the Senate voted against the government's proposal to reinstate a building industry regulator, 34 votes to 36.

Turnbull was expected to address the lower house later on Monday and formally dissolve parliament and call for an election on July 2, media reported. 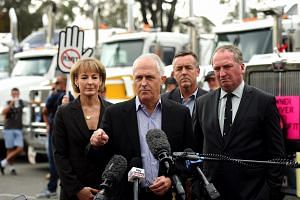 Hamstrung by a Senate dominated by minor parties and the main centre-left Labor party, Turnbull used the rare "double dissolution" manoeuvre - only possible after a bill has been rejected by the Senate twice - to clear both government houses and put the entire legislature to a poll.

When Turnbull recalled parliament last month from a seven-week recess, it was only the fourth time in more than 50 years a government has used that measure.

Turnbull said then that if the Bill failed to clear the Senate he would call an election for July 2.

The Bill had been widely expected to be blocked in the Senate, where opposition lawmakers depicted the proposed construction watchdog as a covert attack on unions, but Turnbull pursued it nonetheless since he has sought a reason to call an election amid sliding opinion polls and a deadlocked upper house.

Support for the coalition was 49 per cent, a Newspoll found on Monday, on a two-party preferred basis where votes for minor parties are redistributed to the two main blocs according to preferences.

Turnbull retained his lead as preferred prime minister over Labor leader Bill Shorten. But his popularity has waned amid perceived dithering over tax reform, a rejection of calls for an investigation into major banks and planned cuts to spending on hospitals and schools.

The sagging polls and likely early election will add pressure on Treasurer Scott Morrison to issue a voter friendly budget on May 3.

But analysts said Morrison faces a difficult task of addressing a ballooning budget deficit of about A$40 billion (S$41.72 billion) this year while shoring up electorate support.