CAIRNS (Queensland) • Australia's military has been deployed to tackle devastating "once-in-a-century" floods that have inundated homes, schools and airports in the country's north-east, forcing hundreds of people to flee and bringing crocodiles on to the streets.

The authorities were forced to open floodgates at a dam near the city of Townsville late on Sunday, unleashing a torrent that threatened to swamp thousands of homes - many already affected after days of heavy rain.

Yesterday, streets had turned into rivers in parts of Townsville, cars were mostly submerged, with picket fences barely poking through waist-deep floodwaters.

Social media carried pictures of locals in small boats with their pets and possessions. Dozens of small aluminium fishing boats called tinnies were being used to carry out impromptu rescues of people and pets from flooded homes.

"We've never seen so much water in our lives," said local radio journalist Gabi Elgood. "You think there can't possibly be any more to come but the rain just doesn't stop."

Desperate residents had to contend not only with flash flooding, landslides and power blackouts, but also several saltwater crocodiles that were spotted in residential roads and cul-de-sacs in the flood-ravaged Townsville area.

Emergency services struggled to respond to the scale of the disaster, and carried out 18 "swift water rescues" overnight. More than 1,100 people called the emergency services for urgent help, said state Premier Annastacia Palaszczuk.

About 400 Townsville residents sought shelter at nearby Lavarack military barracks, and the Red Cross also assisted with the response and recovery effort. "Small boats worked through the night to evacuate members of the community," said Brigadier Scott Winter.

Ms Palaszczuk warned that the communities face more difficulties ahead. Schools and courts remain closed, more rain is on the way and emergency warnings are still in effect for more than a dozen rivers.

The Bureau of Meteorology said the severe weather is set to spread further south to the Whitsunday Islands area.

Ergon Energy spokesman Emma Oliveri said more than 16,000 people were without power, and the company is unable to say when the lights will come back on. 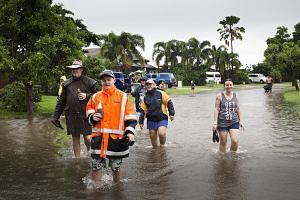 Queensland hit by flooding even as Australia sizzles

The town of Ingham, just north of Townsville, received just over 10cm of rain in just a few hours yesterday morning, according to the Bureau of Meteorology. Winds are expected to blow at up to 100kmh on the coast.

Up to 20,000 homes are at risk of being inundated if the rains continue, officials said.

"It's basically not just a once-in-20-years event, it's a once-in-100-years event," said Ms Palaszczuk. "This is unprecedented, we've never seen anything like this before," she added.

Bureau of Meteorology official Adam Blazak said the downpours could continue until Thursday, while floodwaters will take some time to recede even when the rains lessen. Some areas are expected to get a year's worth of rain in just over a week.

The region receives an average of about 2,000mm of rain annually, but some towns were already on track to pass that. Townsville resident Chris Brookehouse told national broadcaster ABC his house was flooded with water that was more than 1m deep.

He said: "The volume of water is just incredible. Downstairs is gone, the fridge and freezer are floating. Another five or six steps and upstairs is gone too."

In a separate ABC report, the Button family in Townsville, in a video, spoke about how they decided to stay on to watch their home get flooded. The family drank beer and wine as the floodwaters rose in the kitchen and living area on Sunday night. "We're going down with the ship," Mr Button said in the video, which he posted online.

Water levels in the house reached about 0.5m overnight but then fell to about ankle-deep by yesterday morning. In the end, the family left via a small boat tethered in the front yard.

With adverse weather predicted to continue for up to 72 hours, Mr Blazak said some regions could see record-breaking levels of rainfall.

A silver lining to the deluge is that it has given a boost to drought-stricken farmers in western Queensland. The severe drought has left graziers struggling to stay in business.

Farmers were rejoicing after days of heavy rains had turned parched paddocks into lakes in some areas.

Cloncurry Mayor Greg Campbell told ABC that he had watched his region go from breaking a Queensland heat record of consecutive days over 40 deg C, to receiving more than 300mm of rain in just a matter of days.

"I'm sure once it does ease up and we get a week of sunshine, the spirits of our people, especially our graziers, will lift even more seeing those green shoots appear," he told ABC.