WELLINGTON (REUTERS) - New Zealanders have expressed shock after a government minister was punched in the face while walking to work, a rare attack in a country where politicians mingle freely with the public with no security cover.

Mr James Shaw, the climate change minister and leader of the Green Party, was walking alone to Parliament on Thursday (March 14) when he was approached by a man who started talking to him before grabbing him and punching him several times in the face.

Two people came to help the minister but the man quickly jumped into a vehicle and drove away. Police said a 47-year-old man was later arrested and charged over the attack, and is expected to appear in court on Friday.

Mr Shaw, who suffered a black eye, went straight to work after the incident but later visited the hospital as a precautionary measure. It was not clear if the attack was politically motivated.

"We have an environment in New Zealand where politicians are accessible - and that's something we should feel proud of," she said in a statement.

"We are, after all, here to serve people. But today's events really show we cannot take that for granted.

"I think all of us will probably be united in wanting to ensure we have the kind of political environment where everyone can hold their views, but they can do that safely," Ms Ardern added. 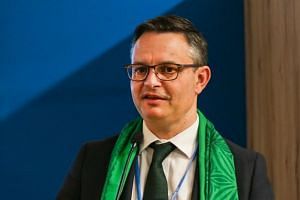 The Prime Minister is the only New Zealand lawmaker given a security team. Other ministers and top officials walk freely and are often seen mixing with the public at shops and cafes in the capital Wellington.

Politicians condemned the attack on the minister and New Zealanders on Twitter cheered for Mr Shaw's speedy recovery and said they hoped the incident would not reduce their access to ministers.

"Violence is never OK. We're thinking of you & look forward to seeing you back at Parliament soon," the opposition National Party leader Simon Bridges said on Twitter after the attack.

Wellington mayor Justin Lester said it was "a sad day for democracy".

"This is outrageous behaviour and if undertaken by a Wellingtonian, shameful. Elected representatives of all hues show courage to represent New Zealanders & we are lucky to have unparalleled access to them," he added.

Serious crimes are rare in the New Zealand and attacks on lawmakers are almost unheard of. The only other recent instance was in 2016 when a protester threw a sex toy at Economic Development Minister Steven Joyce during a news conference.