Noting the ongoing trade war between United States and China, Singapore Emeritus Senior Minister Goh Chok Tong urged Asian countries caught in the middle to be a "moderate voice" to safeguard peace and security in the region.

In Seoul yesterday for a three-day visit, he said countries including South Korea, Japan, India and Asean nations should encourage the two titans to moderate their positions in the interests of the whole world.

"If we want to be independent and neutral in the US-China rivalry, we must exercise our collective influence as the 'moderate voice', and as friends of both the US and China. We all have a stake in building a cohesive and peaceful world," ESM Goh said at the 10th Asian Leadership Conference.

In his speech, Singapore's former prime minister delved deep into the US-China rivalry and shared his own experience witnessing China's transformation over the past 50 years.

The US, he said, views China as a long-term strategic threat to its global supremacy, and many Americans have accused China of taking advantage of the open US economy and stealing both American jobs and technology.

China, on the other hand, feels that the US is trying to curb its growth into a global superpower.

"The recent turbulence over trade tariffs, technological competition and allegations of technological espionage are only the latest manifestations of this strategic rivalry between the US and China," he said. 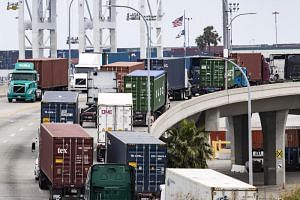 With its rapid economic growth and abundance of talents, China has the potential to catch up, and even overtake, the US in the long run.

But there are also rising concerns about its massive Belt and Road infrastructure projects becoming debt traps for developing countries, its ambition to develop a world-class military by 2050, and the growing power of its leaders.

"To me, the real angst in the US is that while China has implemented significant market reforms, its political system has not seen a similar liberalisation. China has disabused the US' firmly held belief that democracy must come with economic progress," he said.

"The fear of a large and powerful country under a non-democratic regime that can challenge Western democratic values is pervasive and palpable in the US."

ESM Goh noted that China is simply trying to expand its influence and not overthrow the world order.

From his first visit in 1971, and in his meetings with every single Chinese leader since Deng Xiaoping in 1978, he said, the "singular mission of Chinese leaders is to bring China into the modern world, eradicate poverty, raise the standard of living of the population and become a respected First World country".

Going forward, ESM Goh offered three possible scenarios in the US-China face-off. The US could strike while China's military power is still weaker, continue to try to contain China's growth, or develop a partner-rival relationship with China.

The last, "frenemy", scenario is the best for the world, as it is least likely to result in open conflict, he said. "As leaders of both sides have said before, the Pacific is large enough to accommodate both the US and China," said ESM Goh.

"We must take action to encourage the US and China towards the third scenario of competition and cooperation, and reiterate the position that the Pacific, and certainly the world, is large enough for these two superpowers to work together."

A version of this article appeared in the print edition of The Straits Times on May 15, 2019, with the headline 'Asia can be the 'moderate voice' in US-China clash'. Subscribe
Topics:
More
Whatsapp Linkedin FB Messenger Telegram Reddit WeChat Pinterest Print Purchase Article Copy permalink