In the editorial, the paper says that it is important for the United States to get itself involved in regional peace and prosperity, rather than using its relations with Asean as a means of holding China in check.

TOKYO (THE YOMIURI SHIMBUN/ASIA NEWS NETWORK) - It is regrettable that a meeting aimed at stability and development in the Asia-Pacific region has become an arena of competition for hegemony between the United States and China.

A situation must be avoided in which participating countries are divided into two camps, siding with either the United States or China.

Foreign ministers of the 10 members of the Association of Southeast Asian Nations (Asean), plus those of Japan, the United States, China and other nations, have met online.

The meeting was the first opportunity for the United States and China to have direct dialogue since the United States completely rejected China's claims of sovereignty in the South China Sea. But the encounter ended up in an exchange of criticism.

The United States and China held separate meetings with Asean member countries and battled to win them over to their own sides.

The United States stressed that it would fully support the recovery of the regional economy, which has been damaged by the coronavirus disaster, while China promised to provide vaccines to Asean countries on a priority basis.

The United States and China should take into consideration the fact that Asean member countries are caught in a dilemma between the major powers and feel deepening anguish. 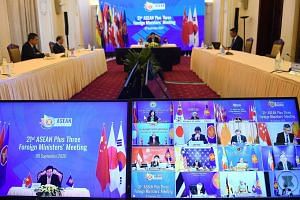 While the Philippines and Vietnam, among others, are competing with China over sovereignty in the South China Sea, their economies depend on China.

Indonesia's foreign minister said the US-China conflict was not beneficial to any country and called for a peaceful solution.

China launched ballistic missiles in August, and in September it has continued its military exercises there. China must stop its unilateral actions for changing the status quo.

Also, the United States should facilitate communications with China and make efforts to ease tensions.

If the United States escalates its military countermeasures in the South China Sea, Asean members would become wary, thus giving China room to take advantage of the situation.

It is also feared that US President Donald Trump will use his hard-line policy toward China to strengthen his support ahead of the presidential election in November.

It is important for the United States to get itself involved in regional peace and prosperity, rather than using its relations with Asean as a means of holding China in check.

At the recent online meeting, with China's actions in mind, Japanese Foreign Minister Toshimitsu Motegi expressed a sense of urgency over the current situation in the East China Sea and the South China Sea, calling for "constructive actions to improve the situation."

The South China Sea is an important sea lane, and ensuring freedom of navigation is in Japan's national interest.

Japan needs to strengthen its ties with the United States and Asean, and contribute to maintaining stability in the South China Sea through international cooperation.