India rolled out the red carpet for the 10 Asean leaders yesterday, as they gathered in New Delhi to mark 25 years of Asean-India relations.

At a commemorative summit, the leaders renewed their commitment to enhance the multifaceted ties between the South-east Asian grouping and its neighbouring South Asian giant.

The summit was co-chaired by Prime Minister Lee Hsien Loong of Singapore, which chairs Asean this year, and India's Prime Minister Narendra Modi. The two expressed hopes for Asean and India to draw closer to each other. They also identified areas of mutual concern.

Noting South-east Asia's deep cultural and historical ties to India, he called for an enhancement in trade, investments and connectivity.

He cited two projects to take relations forward. First, the Regional Comprehensive Economic Partnership - a trade pact Asean and six countries, including India, are negotiating. He hopes talks can conclude this year, he said.

The second is the Asean-India Air Transport Agreement, which he said can enhance people flows, bringing benefits to both sides. 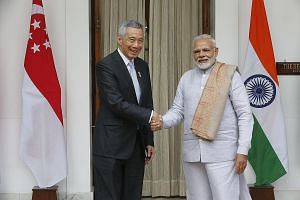 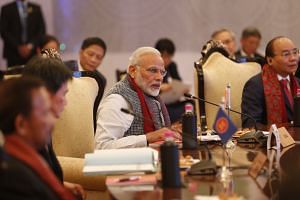 Asean and India: 25 years and beyond

He added: "India shares Asean's vision for peace and prosperity through a rules-based order for the oceans and seas. Respect for international law... is critical for this."

The summit takes place at a time of geopolitical change and as Asean's key partners - including China, India, Japan and Australia - seek to deepen their engagement with the grouping.

Asean-India relations have grown considerably over the past few decades. India viewed the regional grouping with suspicion during the Cold War. But relations took off in the 1990s, with then Prime Minister Narasimha Rao's "Look East" policy. Relations have since extended beyond economics to cover security and other issues. The two sides became "strategic partners" in 2012. After PM Modi took office in 2014, the "Look East" policy was renamed the "Act East" policy.

Celebrations will reach a climax today at the Republic Day Parade. Asean leaders will attend as chief guests - the first time India has hosted more than one chief guest at the event to mark the day its Constitution took effect.

Asean is deeply honoured by the invitation, said PM Lee.

Yesterday's summit adopted the Delhi Declaration, which reaffirms the commitment of Asean and India to work closely together on issues of mutual concern and ensure an open, transparent, inclusive and rules-based regional architecture.

But some observers are cautiously optimistic about it, noting trade between the two sides has stagnated since the last summit in 2012, while Asean-China trade looks set to grow with the Belt and Road Initiative.

"There is broad-based economic engagement, ongoing diplomatic and defence cooperation, as well as constant cultural engagements that emphasise the civilisational ties between India and South-east Asia."