Asean and China must quickly conclude the Code of Conduct in the South China Sea for maritime stability so that the regional grouping can maintain its centrality, Defence Minister Ng Eng Hen said yesterday.

He added that the United Nations Convention on the Law of the Sea (Unclos) should also be strengthened, as it is "the legal framework which both rights of navigation and claims of resources are based on".

Dr Ng was speaking at the 20th Asia-Pacific Programme for Senior Military Officers organised by the S. Rajaratnam School of International Studies.

Last Thursday, Foreign Minister Vivian Balakrishnan said at the Asean Foreign Ministers' Meeting that Asean and China have agreed on a single text to negotiate the Code of Conduct and the key modalities for future negotiations.

"If Asean member states begin to take sides, assert or close itself to the international community, then its centrality would weaken," he said.

He highlighted areas in trade, connectivity and defence that Asean must focus on in order to maintain its centrality. For example, he called on Asean countries to "eschew national protectionist or nativist trade policies".

He said that while Asean should work collectively to avoid trade wars or blocs, member states should also continue with multilateral free trade agreements, as they have with the European Union and China. 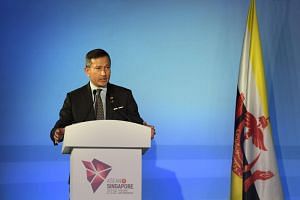 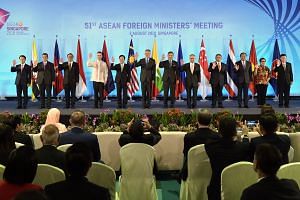 Asean must also step up connectivity among its members and with the world, he added.

Citing how commercial air growth in the region has outpaced the world's average air traffic growth rate, Dr Ng said Asean must maintain the conditions for continued growth in air and sea traffic. "This is the reason why Singapore subscribes to the Code for Unplanned Encounters at Sea for the maritime domain, and as chair of Asean this year, we will facilitate a Code for Unplanned Encounters for the air," he said.

He added that the diplomatic row between Qatar and its neighbours last year should never happen in this region as it would cause "lasting damage" to Asean.

Dr Ng said Asean states must deal with disputes through peaceful settlement, as they have done during the Thai-Cambodian border dispute, and the Ligitan and Sipadan territorial dispute between Indonesia and Malaysia.

The minister also said if Asean can maintain its centrality, the region will see continued growth in population, commercial air traffic, sea traffic and digital traffic. This "could potentially add US$1 trillion (S$1.37 trillion) to Asean's gross domestic product in the next decade alone".

" It would be an Asean with all of its 10 capital cities put up as models of emerging and developed economies for the rest of the world," said Dr Ng.