It stresses inclusive, rules-based framework to build strategic trust and cooperation in region

Asean leaders announced a collective vision for the Indo-Pacific region yesterday in an attempt to reclaim the geopolitical narrative amid the strategic rivalry between China and the United States.

The non-binding statement foregrounds an inclusive and "rules-based framework" to "help to generate momentum for building strategic trust and win-win cooperation in the region".

While mentioning neither the US nor China by name, the document says: "The rise of material powers, i.e. economic and military, requires avoiding the deepening of mistrust, miscalculation and patterns of behaviour based on a zero-sum game."

Prime Minister Lee Hsien Loong told his counterparts at the Asean leaders' retreat in Bangkok yesterday: "It reaffirms our commitment to Asean centrality and unity. It advances economic development and a rules-based world order anchored on international law.

"I hope this outlook can strengthen the existing inclusive Asean-led regional architecture and maintain a stable region that all of us will benefit from."

Consensus-based Asean has been criticised for being slow to respond to emerging threats to stability amid the big-power competition in its backyard. While Washington has been tapping allies across the Indian and Pacific oceans under its Free and Open Indo-Pacific strategy, an increasingly assertive Beijing has been busy linking up economies from as far as Africa and Europe through infrastructure projects under its Belt and Road Initiative.

Both countries are now locked in a trade war that has roiled regional economies. 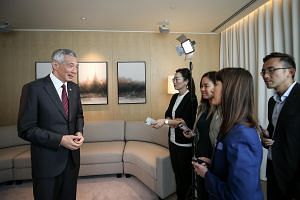 Asean nations on their own cannot control big powers, but together can make their voices heard: PM Lee

Much of the material in Asean's Outlook on the Indo-Pacific reprises material from earlier statements issued by the bloc.

Thai Prime Minister Prayut Chan-o-cha, while rounding up the Asean Summit in Bangkok yesterday, said: "Asean believes that cooperation under the Indo-Pacific concept should... also complement existing frameworks of cooperation at the regional and sub-regional levels and generate tangible and concrete deliverables for the benefit of the region's peoples."

ISEAS - Yusof Ishak Institute analyst Tang Siew Mun told The Straits Times: "The outlook will provide Asean member states 'cover' in responding to pressures to support or move away from existing Indo-Pacific proposals. Asean now has its own narrative and injects its perspective to the ongoing discourse."

But Asean also needs to go beyond the statement and take concrete action to protect its interests, he stressed.

At the weekend, Asean leaders also endorsed a declaration to combat marine debris, and launched a satellite warehouse to improve the delivery of aid to victims of disasters within the 10 countries.

They also pledged to push for a speedy conclusion of a Code of Conduct in the South China Sea, a vital waterway which is claimed largely by China and in parts by the Philippines, Vietnam, Indonesia and Malaysia.

A first reading of the negotiating draft is expected to be ready by the end of this year.

Fears of instability have heightened since the militarisation of disputed islands. Earlier this month, a Philippine fishing boat sank after it was rammed by a Chinese vessel.

PM Lee told reporters that the substance of the Code of Conduct was just as important as the timing.

"I don't think we can compromise on the content in order to say the deadline is here, let's just make a deal." he said. "That is the difficulty - it is not whether you want to go faster or slower. I think you should go with all due dispatch, but we have to make sure that we preserve our vital interests. And I think the vital interests will not be easy to reconcile."