DA NANG - A meeting of Asia-Pacific's trade and foreign ministers in the Vietnamese city of Da Nang ended nearly 24 hours later than scheduled, due to a difference in opinions on trade and protectionism.

The Asia-Pacific Economic Cooperation (Apec) ministerial meeting, which was supposed to have wrapped up on Wednesday evening, extended to Thursday (Nov 9).

Vietnam's Minister of Industry and Trade Tran Tuan Anh added: "There were diverse views, but we were able to conclude with a very good outcome, which reflects the interests of all Apec economies," he said.

Negotiators from the United States were reportedly the ones who stalled the talks, as they insisted on changes to some of the language used in a communique for Apec leaders ahead of their retreat on Saturday.

The US' concerns were mainly on issues such as free trade and protectionism, according to officials present at the closed-door meeting.

Representing Singapore at the meeting were Minister for Trade and Industry (Trade) Lim Hng Kiang and Senior Minister of State for Foreign Affairs and Defence Maliki Osman.

A Bernama report on Thursday quoted Malaysia's International Trade and Industry Minister Mustapa Mohamed as saying there were differing opinions on protectionism and the balance of trade.

"We used to speak in one voice before, opposing protectionism and supporting the multilateral trading system," he said. "Although it did not look tense, it's hard to get the consent of all members." 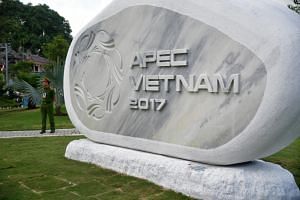 Mr Mustapa noted that the US did not want to use the word "protectionism" in the text, preferring the phrase "fair trade" instead.

"We are aware of the current US administration's views. They have big issues with Japan and China as they argued that the trade surplus occurred due to the unfair world trading system. That is the dispute at the meeting this time around," he said.