Speculation on social media had linked Mr Farhash to Mr Haziq Aziz, who had claimed he was one of the two men shown in the leaked sex video that had gone viral.

Mr Haziq also claimed last week that his partner in the video was Datuk Seri Azmin, deputy president of Parti Keadilan Rakyat (PKR), which is led by Mr Anwar.

Mr Farhash denied he was involved in the scandal that has rocked Malaysian politics.

"My name came up all of a sudden because, supposedly, I was not seen at Anwar's Hari Raya open house, and that I was missing," Mr Farhash told The Star daily in an interview yesterday.

The sex video has raised tensions between the Anwar faction and the other group led by Mr Azmin. The minister is claiming that the video clips were released by Mr Anwar's supporters. And since Mr Farhash works closely with Mr Anwar, he was dragged into the controversy. 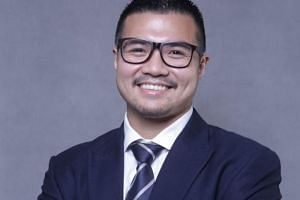 Mr Farhash was quoted as saying by The Star daily yesterday: "Let me just clear this up. This whole thing about me being missing was started by Raja Petra Kamaruddin's tweet."

Mr Farhash said pro-Umno blogger Raja Petra tweeted that he had gone missing. There were also rumours that Mr Farhash was with Mr Haziq when he was arrested at Kuala Lumpur International Airport last week while trying to fly out of the country.

"For me, (Raja Petra) is someone who writes good fiction. I just refused to respond. So I was dragged into this and it was made worse by news reports that I was missing," Mr Farhash said.

He maintained that he had been going about his regular routine and that he was in his office during Mr Haziq's arrest.

"In fact, I had to pull up my CCTV recording of where I had been, just to prove that this thing has been blown out of proportion, with people now thinking that I'm part of this whole 'sexpionage'."

Mr Azmin, 54, has strongly denied being in the video or having any relationship with Mr Haziq, 27.

Mr Azmin, a rising political star in the year-old Pakatan Harapan government, has accused PKR insiders of masterminding the spread of the video to kill his political career.

Mr Haziq, meanwhile, had gone on to claim that he and Mr Azmin first became intimate in 2016.

Mr Anwar's supporters are calling for Mr Azmin to step down while police carry out investigations, while Mr Azmin wants Mr Haziq to be sacked from the party.

But a PKR political bureau meeting chaired by Mr Anwar on Wednesday decided not to sack Mr Haziq. The party will instead issue a letter asking him to explain his actions.

Prime Minister Mahathir Mohamad yesterday again said there was no need for Mr Azmin to step aside while police probe the issue.

The scandal has led to cracks in the party as the warring factions exchange harsh words.

A version of this article appeared in the print edition of The Straits Times on June 21, 2019, with the headline 'Anwar's aide says he is not behind gay sex video'. Subscribe
Topics:
More
Whatsapp Linkedin FB Messenger Telegram Reddit WeChat Pinterest Print Purchase Article Copy permalink