The Indonesian authorities have made a fresh arrest in connection with a plot to launch a rocket attack on Marina Bay hatched by the leader of a terrorist cell in Batam.

A 24-year-old man was apprehended by commandos from the elite Detachment 88 counter-terrorism unit who raided an Internet cafe in Batu Aji in Batam last Saturday morning.

Eyewitnesses at the Matrix@Net cafe said eight heavily armed officers rushed in and grabbed the suspect.

The Straits Times understands that police intelligence had linked the suspect to the Batam-based Katibah Gonggong Rebus (KGR) or Boiled- Snails Cell.

The police previously said Gigih, a 31-year-old factory worker, had planned the rocket attack under the direction of Indonesian militant Bahrun Naim. 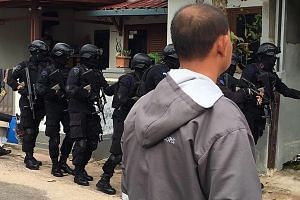 Plot to attack Marina Bay with rocket from Batam foiled

Bahrun, who is believed to be in the Middle East fighting for the Islamic State in Iraq and Syria (ISIS), has kept in close contact with ISIS loyalists in Indonesia via smartphone messaging app Telegram.

The rocket attack plot came to light after Gigih and four KGR members were nabbed in Batam on Aug 5.

Though weapons such as a bow and arrow and an airsoft gun modified to resemble an AK-47 assault rifle were seized in police raids, no rocket was found.

Besides helping Indonesians travel to Syria, he is also said to have received funds from Uighur separatists belonging to the East Turkestan Islamic Movement based in China's restive Xinjiang region.

The money is believed to have been used to smuggle Uighur militants into Batam or harbour others who had managed to enter Indonesia from a third country such as Malaysia.

Gigih and his men are accused of having done similar things.

The "rocket attack" plot targeting Marina Bay was one of several terror plots thwarted by the Indonesian authorities in recent months.

In January, ISIS claimed responsibility for a terror attack in Jakarta.

A suicide bomber named Nur Rohman, who struck a police outpost in Solo in July, is also said to have had links to the KGR and Bahrun.

Correction note: In an earlier version of the story, we referred to Riau Islands police chief as Sambudi Gusdian. His name should be Sam Budigusdian. We are sorry for the error.