Besides financial setback, its reputation and relations with neighbours are also at risk

Early estimates by the Joko Widodo administration indicate that the haze crisis could set Indonesia back by up to 475 trillion rupiah (S$47 billion) - no chump change to a government already grappling with a sliding rupiah and sluggish growth.

However, observers warned that economic pains aside, the country's global standing will also take a hit if it does not resolve the decades-old issue, caused by illegal forest fires in Kalimantan and Sumatra.

The blanketing haze from the fires, often burning over dry peatland, has affected millions across Indonesia, Singapore and Malaysia, as well as parts of the Philippines and Thailand more recently.

It has forced schools to close, flights to be delayed and major sporting events in both Singapore and Malaysia to be cancelled. 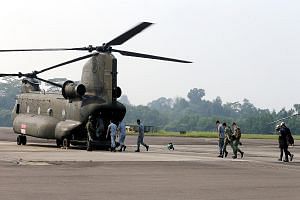 For Indonesia, more than 136,000 of its people have suffered from respiratory infections. There were also unverified reports of a few haze-related deaths, including that of a 15-year-old schoolgirl.

The cost of this crisis, whether for Indonesia, Singapore or Malaysia, will likely be the same... the only difference is that Indonesia will probably lose much of the goodwill it has with its neighbours. That has not been estimated and will emerge as a massive intangible cost to the Indonesians.

Researchers Tiola Javadi and David Han from the S. Rajaratnam School of International Studies (RSIS) said in a report last week that the crisis, if prolonged, could strain relations, particularly between Indonesia and its closest Asean neighbours, Singapore and Malaysia.

Professor Euston Quah, who has spent years researching the economic impact of the transboundary haze, agrees.

"It is too early to tell what the economic costs of this year's haze episode will be because it will probably go on until early November due to El Nino," said Prof Quah, who heads the economics division at Nanyang Technological University.

"But the cost of this crisis, whether for Indonesia, Singapore or Malaysia, will likely be the same... the only difference is that Indonesia will probably lose much of the goodwill it has with its neighbours. That has not been estimated and will emerge as a massive intangible cost to the Indonesians," he added.

The "confusing verbal exchanges between Indonesia and Singapore on the haze issue" do not help Indonesia's cause, said Mr Javadi and Mr Han. They were referring to Vice-President Jusuf Kalla, who rapped his country's neighbours for grumbling about the haze but never thanking Indonesia for the clean air they enjoy for the rest of the year.

Another episode that had threatened to sour ties was Indonesia's repeated rejections of Singapore's offer of assistance. But the matter appears to have been put to bed after Jakarta last week formally accepted offers of help from several countries, including Singapore.

The transboundary haze, which first grabbed headlines in a big way in 1997, cost the region an estimated US$9 billion then. 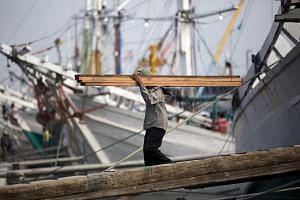 Jakarta loses $12.5b in timber royalties

This year's haze, which has already affected more than 28 million people living in Indonesia, is likely be worse than that in 1997.

While the economic impact of the haze in 2013 - when air pollution hit record levels in Singapore - and this year has yet to be quantified, it is likely to be more significant, said Associate Professor Mely Caballero-Anthony, who heads the RSIS Centre for Non-Traditional Security Studies, and Associate Research Fellow Goh Tian, also from RSIS.

Prof Quah, who is also president of the Economic Society of Singapore, noted while the current haze period is "quite similar to 1997", the economic costs then were compounded by the Asian financial crisis, which inflated the costs.

"This year, we don't have a financial crisis but El Nino is the strongest in 50 years... so this year when they tabulate the final (costs of the fires and haze), I am sure the costs will be higher than in 1997," he said.

Based on its own calculations, the Indonesian government reckoned that the cost of mitigating the crisis this year would range from 300 trillion to 475 trillion rupiah.

It is not clear how the figure was derived, but the country's National Disaster Management Agency (BNPB) had already said last month it may have to use up all 385 billion rupiah in government funding earmarked for tackling the fires and also turn to a 2.5 trillion rupiah "on-call fund" set aside for other types of disasters.

The Joko government has also allocated US$1 million (S$1.4 million) to provinces in Sumatra and Kalimantan that are bearing the brunt of the fires.

To date, tens of thousands of soldiers, policemen, BNPB personnel and Environment and Forestry Ministry officials have been deployed to tackle the fires and build canals to make it easier to "re-wet" peatland, which burns easily during the dry season. The construction of the canals over sprawling plantation land will be funded by Jakarta, Mr Joko had said previously.

His government has also taken the unprecedented step of openly going after those who use the outlawed slash-and-burn method of clearing land to cultivate crops like oil palm. The authorities have since arrested hundreds of suspects and begun investigations into several plantation firms suspected of starting illegal forest fires.

It is not known if the Ministry of Environment and Forestry has already included these new purchases in its calculations, but observers believe that the costs will inevitably mount for Jakarta as the current crisis continues.