Two people were killed and at least four wounded in a grenade attack on a mosque early yesterday morning in Zamboanga city, a key gateway in the Philippines' restive south.

This occurred just three days after twin blasts rocked a Roman Catholic cathedral on Jolo island, south-west of Zamboanga, and left at least 21 dead and more than 100 injured.

Chief Inspector Shellamae Chang identified those killed as Mr Habil Rex, 46, and Mr Haj Sattal Bato, 47. Both were said to be Muslim missionaries.

An unidentified assailant reportedly lobbed a grenade at the Kamahaldikaan mosque, in Talon district, where about 10 people on a Muslim retreat were sleeping, just past midnight yesterday.

One investigator told online news site Rappler that a safety lever of a Belgian-made grenade was recovered at the scene.

In a statement, the Ulama Council of Zamboanga Peninsula called the attack "devilish, irrational and inhumane".

President Rodrigo Duterte's spokesman Salvador Panelo said in a text message: "Terrorism has once again reared its barbaric and ugly head. The successive attacks on two different places of worship depict the ruthlessness and the godlessness of these mass murderers." 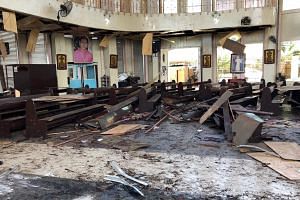 Defence Secretary Delfin Lorenzana said in a news conference yesterday that it was possible that the Islamic State in Iraq and Syria (ISIS) terror group could also be behind the attack on the mosque.

ISIS has claimed responsibility for Sunday's cathedral bombing, which it said was carried out by suicide bombers.

"ISIS may want to bring it to a higher level of religious war. But Catholics, Christians and even mainstream Muslims are not biting into that," he said. For now, he said, "there doesn't seem to be any connection".

Security forces are currently chasing after militants from the Ajang-ajang faction of the Abu Sayyaf, a small but brutal gang of self-styled Muslim militants founded in the 1990s with seed money from Osama bin Laden's Al-Qaeda network.

Initial investigations showed that the two blasts that tore through the Cathedral of Our Lady of Mount Carmel were set off remotely using a cellphone, and were not a suicide attack.

Wading into the issue, Foreign Secretary Teodoro Locsin said in a tweet: "Now the mayhem is interfaith. That means the secession is over, and plain vanilla mass murder has taken over."

Security officials, though, advised against painting the Jolo and Zamboanga attacks as a religious conflict. "It is not a retaliatory act," Colonel Leonel Nicolas, commander of Joint Task Force Zamboanga, said of the attack on the mosque.

A local militant, meanwhile, was killed in a raid on Tuesday on a home where one of the suspects in the Jolo attack was hiding.

Colonel Gerry Besana, spokesman for the Western Mindanao Command, said Ommal Usop, 64, was killed when he drew a firearm as security forces were swooping down on his home. Usop is said to be a kin of a certain "alias Kamah", who was suspected to be a key planner of the bombing. Kamah and one other unidentified man managed to flee. Only Kamah was seen in CCTV footage running away seconds after the first bomb exploded inside the Jolo cathedral. Usop, however, is a known Abu Sayyaf militant.

President Duterte said on Tuesday the twin blasts that rocked the Jolo cathedral may have been a suicide attack carried out by the Abu Sayyaf, citing a briefing given to him by military commanders. "It exploded. That is terrorism and suicide," he said when asked by reporters to clarify an earlier remark.

He said a woman wearing a crucifix detonated a bomb inside the cathedral, and that a male companion had blown himself up outside minutes later.

Military investigators, however, have said bystanders saw a woman, presumably the female bomber, put a bag onto a wooden pew and leave the cathedral shortly before the blasts. They also believe the second bomb was rigged onto a motorcycle parked just outside the church's compound.